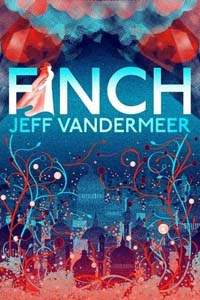 Jeff Vandermeer is one of the leading lights of 'new weird' a sub-genre of SF/F that - and I'm simplifying here - fuses together elements of science fiction, fantasy and horror and places them in a gritty, usually off-kilter and slightly surreal, contemporary setting. As you would expect then, Finch, the third in Vandermeer's 'Ambergris Cycle' after City of Saints And Madmen and Shriek: An Afterword, fulfils all of those criteria easily and with aplomb, melding them into a noir detective story that, while utterly humdrum in structure and execution, lives long in the memory.

Ambergris is occupied by the gray caps, a race of fungal creatures that utilise their fungus to control, pacify and subdue Ambergris' human inhabitants, after all fungus is everywhere, gets everywhere, and once it takes hold it is almost impossible to eradicate. However, the control they exert has extended beyond simple occupation to encompass internment camps, torture and acts of violence and terror and thus a Resistance - though scattered and largely hidden - is building. Against this backdrop the gray caps are using a workforce press-ganged from the camps to build two huge towers out near the bay and the pace of work is quickening. Something big is happening, the world is changing again, everyone knows it and no-one seems able to stop it.

Finch is a detective and, like most folk who hold down a job of 'authority' works for the gray caps; he doesn't like it but the alternative is worse. Finch is called to a murder, which is unusual in itself - only four murders in the entire year three of which turned out to be suicides and the fourth was solved in less than a day - but this one is different. Two bodies, a human and a gray cap, one of which has been cut in half, have been found in a locked room in an unoccupied apartment. His task is to solve it quickly to appease his bosses but things get messy when various resistance members start to get involved and a network of organised criminals start threatening him, worse still Finch is in danger of being found out. You see Finch isn't really 'Finch' at all and if he's discovered his life will get very complicated indeed.

The first thing strikes you when reading Finch is the clipped, staccato phrasing of the sentences which, I assume, has been utilised in an effort to reinforce the noir credentials of the story and to emphasise the fractured and disjointed world in which Finch lives. As a stylistic tool it does lend something of the Elroy James pulp detective novel to things but it is also badly overused and will often throw the reader out of the narrative while they backtrack and re-read sections just to get a handle on what is actually going on. Add to this the fact that the dialogue has little or no subtlety and the description is melodramatic at best and it takes fortitude to plow on and get to the good bits.

That said, the style does cover a multitude of sins. Finch is a generic hard-boiled detective story and Finch himself is pretty one-dimensional as a detective character. He plods along, never really knows what's going on, never looks for or finds any clues, is outsmarted by just about everybody and gets beaten up a lot. The obvious femme fatal turns out to be just that, the loyal partner destined to die does just that and when all is said and done he doesn't even solve the case. But really the star of the show is the world that Vandermeer has created. Ambergris is an interesting place with an interesting history and with this book, set a century or so after, refers back to Shriek and for those who've been here before it adds weight to the proceedings. The fungus is a clever conceit used well and Finch's home life and the lives of those around him do give a sense of lives shattered by occupation and hanging on to the past lest it escape them completely.

There are other nice touches, each chapter save the last is prefaced by an interrogation scene involving Finch and a gray cap and these are both violent and intriguing, promising much as we move through the story. The back-story is nicely handled and the pacing, while slow and methodical, is just about right for the events that unfold given that we are working to a timeline of about a week.

All in all Finch is an interesting read. Don't get excited over the noir detective story, it's not good enough or well enough executed for that, but for a fine example of 'new weird' writing and a world that is certainly like no other then give it a try, you never know, it may be right up your street.

Finch is published in the UK by Corvus Books and is available from Play.com, Blackwell and all good book stores.