How To Live Safely In A Science Fictional Universe 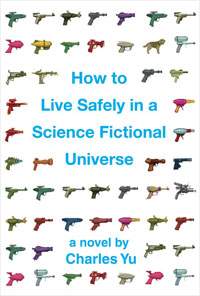 I knew nothing of this book before picking it up, I just liked the cover, and sometimes it can be as simple as that when it comes to choosing the next read, but beneath this fun and campy cover lurks a very different science fiction novel, one that, while it may well be a heart-breaking work of staggering genius, left me oddly cold.

The story, such as it is, revolves around one Charles Yu, a time-machine repair man, whose main job is to find the glitches in time travel and fix them. Often this means saving people from themselves as they inevitably try to go back and fix things that went wrong (alas impossible) and he usually ends up just helping folk to come to terms with things and move on. But Yu has spent a decade avoiding work following his father's disappearance, and his mother's retirement to a one-hour timeloop of her choosing, and Yu now lives in a timeless place, a place where he can keep himself to himself, not interacting with anyone unless absolutely necessary and where his only companions are an imaginary dog called Ed, the time machine's software, TAMMY, with whom he has an almost romantic relationship, and his boss, Phil, who doesn't know that he's really a computer program.

Everything is ticking along nicely for Yu until he gets a call from Phil to take his time machine in for a service. When Yu lands he sees a version of himself running towards him and, in a moment of panic, shoots the other-self in the stomach, which is a beginners mistake. Without waiting around to see the consequences he takes off and gets away but he's left himself in a time loop with nothing but a book he gave himself called How To Live Safely In A Science Fictional Universe for company and a written instruction that the answer to his problems lies somewhere in those pages.

While HTLSIASFU is ostensibly about time travel it is, at it's heart, about relationships. Yu is looking across time for his father, with whom he shared a sort of fractured relationship and who went missing in a time machine of his own four years previous. He is also looking to rebuild his relationship with his mother, a not always positive influence in his life, and all the while he is avoiding new relationships with people while building stronger ones with the software and hardware that surrounds him. In fact, truth be told, the time travel actually serves as a giant mcguffin that allows Yu, through his meditations, to discover something about himself while on the road to self realisation.

Composed of long, sometimes funny, often meandering monologues, unfortunately Yu appears mired in self pity a lot of the time which is not a likeable trait, and while the prose is nicely written, there is so much repetition, and so many places where Yu uses a dozen different words to describe the same thing a dozen different ways, that it quickly becomes tedious and I found myself wondering whether it was really clever writing or just a means to bulk out a thin plot and push it over the 200-page mark.

But despite these failings there is a strong story in here with some interesting elements. In particular the book which Yu hands himself turns out to be from the future, thus it is writing itself even as it is being read and, as it is the story of Yu's life, he is experiencing it even as he reads the pages.

HTLSIASFU is definitely worth the read, it's clever, witty and will one day turn out to be very important I'm sure. But Yu is not the most sympathetic or likeable of protagonists and that, for me, meant it wasn't the most engaging read and I found it hard to care too much about the outcome.

But don't take my word for it, as usual, your mileage may vary.

How to Live Safely in a Science Fictional Universe is published by Atlantic Books and is available from Play.com, Blackwell and all good book stores.