The Reapers Are The Angels 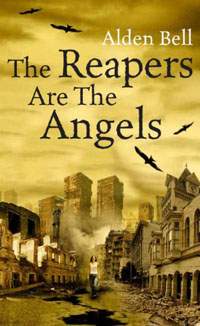 I put off reading this for a long time because I thought it was “just another zombie book” but boy, how wrong you can be. The Reapers Are The Angels is a tour de force, the kind of literary triumph that doesn't come along too often and rarely in genre novels, truly it deserves spectacular success.

The story starts 25 years after whatever apocalypse brought about the collapse of civilisation. Our protagonist, Temple, at 15 years of age was born into this world and has never known any different, and she has been surviving, on her own, for a very long time, not always in a good way or a nice way, but in whatever way she has had to, and she carries her guilt around like a weight on her shoulders.

Following another change in fortune she packs her meagre things and hits the road until she finds a small community who take her in and offer to let her stay. She gives it a try but is soon subject to a sex-attack during which he accidentally kills her attacker, and so sets off again before things can turn bad. Unfortunately the brother of the dead man, Moses, swears to avenge his sibling's death and sets off in pursuit. Along the way, Temple rescues Maury, a giant of a man but clearly backward and helpless. She finds a note on him with his name and the address of some relatives that might help him so she decides to ensure he gets there and in some way absolve herself of all the wrongs she has committed in her short life – that is, if she can stay ahead of Moses.

The first thing to talk about with The Reapers Are The Angels is the writing style. It doesn't use quotation marks for speech and does away with a lot of the usual punctuation around dialogue, and thus a lot of the weight, and this makes the whole story flow beautifully, word after glorious word, without any filler to bulk it out. The second thing is that the speech carries with it a distinct southern US flavour which lends it a kind of folksy charm that is in total contrast to horror of the setting and this announces itself perfectly when Temple ruminates on the nature of beauty and God before cracking a joke and then stoving a meatskin's head in with a rock.

Temple has a very well defined sense of right and wrong and a strong religious bent and even in this terrible world that she has known her whole life she can still find some miracle, some beauty that gives her hope. Hope for humanity and hope for her own redemption. But her down-home wisdom is in stark contrast to how downright tough she can be and despite being really likeable and truly interesting as a character she comes across as fiercely independent and ultimately a loner, not daring to trust new people, not really willing to commit because the ones you love will eventually turn against you.

But she's also a person of contrasts. There's a lovely scene towards the end of the book where she meets a boy her own age in one of the bigger communities and goes on a date, has a soda and shares an awkward kiss, things that hint at the life she might have had if not for the zombie apocalypse and these things come to the surface occasionally in her time crossing the country with Maury. But the real powerful stuff comes in the scenes she shares with Moses, her pursuer, as they come face-to-face a few times during the book. Despite everything, the two of them share a dark side and deep mutual understanding for the way things are and respect for how things should be. As a much a kind of uncle as her hunter, it is during the moments they share together that you realise that, of all the people they will encounter, they are most suited to each other, but despite this weird 'almost bond' they are too alike to be together.

The world that Bell has created is simple and uncluttered, we know nothing of the events that made the world the way it is and we frankly don't care which is how it should be as we look at it through Temple's eyes. All of the characters, even the minor ones, are well drawn and nicely rounded and, as I've previously said, the words flow beautifully and the pacing is superb. It's not an action book by any means but there is always something going on and it will draw you in relentlessly to the end where I defy you not scream out loud such is the surprise that awaits.

The Reapers Are The Angels is a fabulous read and, for me, a book that redefines the zombie genre into something intelligent, thoughtful and powerfully dramatic. Already one of the best books of the year, it'll be a major mistake if you let it pass you by.

The Reapers Are The Angels is published by Tor through Pan Macmillan and is available from Play.com, Blackwell and all good book stores.

Alden Bell doesn't appear to have a website, but if that changes I'll let you know. In the meantime, read an extract from the book here and find out what Alden Bell's literary influences are here.