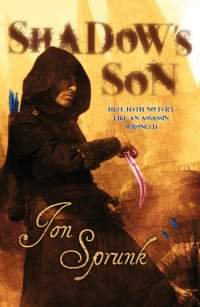 ...Jon Sprunk hits just the right notes with Shadow's Son and while it can easily be enjoyed as a standalone, I'm looking forward to the rest of the series already.

Caim is an assassin, has been for a long time, and the holy city of Othir provides a good living and something of a home for him and his spirit guardian, Kit. Caim is offered a routine job from his usual employer, to kill am elderly noble but with an unusually fast turnaround time attached, and against his better judgement and with a sense of loyalty to his benefactor, he accepts. When it subsequently goes bad, not just for him but for the daughter of his erstwhile victim, Josephine, Caim finds himself turning rescuer and ends up hunted across the city, his allies and friends turning up dead and his house burned to the ground. With Josephine in tow he sets out to discover who is behind this attempt to kill him and the other murders and soon uncovers a conspiracy that goes right to the heart of the empire, and an evil he recognises from deep in his past, and in order to bring about its downfall he must claim his birthright as the Shadow's Son....

Shadow's Son is a reasonable length, less than 300 pages, because there's no fat anywhere. The world-building is short and to the point, the magic system (such as it is) neither needs nor gets any kind of explanation and the plot moves a brisk pace, full of attention-grabbing action and fight sequences that are exciting and well thought through with a terrific energy. Having said that the detail is there where it matters, the characterisation is good, revealing more and more of each of our protagonists as the story goes on and we can feel the initial antagonism between them develop into a relationship slowly, in the right way, rather than rushed and convenient.

It's fair to say that there's nothing at all new in here, we've seen and heard it all before so it's not going to change the face of fantasy writing for anybody, but Sprunk's narrative has a solid core, is structured perfectly and is written in a very easy style and with a fluidity and feel for storytelling that just lifts you up and pulls you along for the ride, right up to the very traditional (some might say cheesy) ending, like a good Hollywood movie.

So if you're looking for a fast, frenetic fantasy with compelling characters and plenty of action look no further, Shadow's Son hits the spot.

Shadow's Son is published by Gollancz and is available from Play.com, Blackwell and all good book stores.