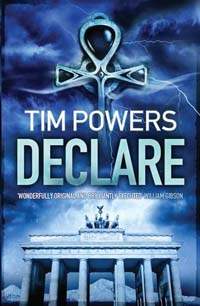 Book two of the six Arthur C Clarke Award nominees is Declare, a hugely ambitious novel that spans continents, decades and genres, mixing as it does elements of alternate history, science fiction and fantasy. The book centres around the Cold War and in particular the life of Kim Philby who was a very high ranking member of the British Secret Service while being a double agent for the KGB for close to five decades. Into this historically accurate story Powers has dropped one Andrew Hale, who from a very young age has been sworn to the service of a clandestine organisation nestled within the Secret Service itself. Hale, it transpires, has a unique, almost symbiotic relationship to Philby and it is because of this that he is both used and watched over by the Service his entire life. Under the direct supervision of the mysterious Theodora, Hale's career begins as a young man acting the disgruntled student and joining the communist party. After a staged transgression he is eventually approached by a communist network and transported to WWII France as a radio operator. Here he meets and falls in love with Spanish exile Elena Ceniza-Bendiga and it is this relationship that will define his actions for the rest of his life. A series of complex events during and immediately after the war lead him to Operation Declare, a mission on Mount Ararat that goes disastrously wrong, setting the cause of, and reasons for, the decades long Cold War that followed. It is during this time that Hale gets the chance to go back to Ararat and try again, only this time he has to succeed.

Powers has always been a fine novelist but in Declare he really does flex his writerly muscles. The attention to historical detail is nothing short of awe inspiring and the way he folds in historical fact and fictional events with both real people and imagined characters in such a complex plot is close to genius, especially as along the way we visit London, Istanbul, Kuwait, Berlin and Paris, involving St. John Philby (Kim's father), T. E. Lawrence (of Arabia), Noah's Ark, fantastical beings and assorted characters from the KGB, the GRU, SIS, MI5 and the SDECE, the French equivalent of MI5. He's always been a master at blending fantasy with historical fact but in Declare he has surpassed himself.

Reading like a John Le Carré novel for the most part, despite some early hints, the book makes a decent fist of hiding the fantasy elements until the big reveal and it's a much stronger book because of it. Powers takes the time to demonstrate the civil service mundanity of the spy world, much like a George Smiley novel or Deighton's Harry Palmer, the political infighting within the Secret Service, the distrust between supposed allies and the ethically and morally flexible mindset of those that inhabit this world.

The writing style too is beautifully done, the clipped speech and brusque mannerisms that mark the era can be found here and the societal roles are nicely played out. It's another mark of how well he has done that even the brief periods of historical exposition needed to understand the plot don't feel too heavy handed, rather they fit into the briefing/de-briefing world of the spymaster. It's not a fast-paced novel by any measure. Narratives this complex take time to build and Powers takes his time playing out the beats and letting the various twists and turns along the way take you by surprise.

So was really a contender? I have to I did enjoy Declare immensely but it didn't keep me engaged in the way some books do. It's not a rip-roaring adventure and, as such, I never felt that I couldn't put it down. If anything, I read it constantly marvelling at how clever it was rather than caring too much about what was happening and that's not really a good sign. it was heaped with praise on it;s first release, garnering the International Horror Guild's Best Novel of 2001, World Fantasy Award for Best Novel 2001, Second Best Fantasy Novel of the 2001 LOCUS Poll and nominated for the 2001 Nebula award, the 2002 Mythopeoic Award, the 2005 Phantastik Preis best foreign novel, but compared to a couple of other nominees it wasn't gripping enough to draw me right in and never let me go.

So all-in-all a terrific book; smart, clever, well-written and tremendously interesting but not a Clarke Award winner, not for me, and clearly not for the judges either.

Declare is published in the UK by Atlantic Books and is available from The Book Depository, Blackwell and all good book stores.