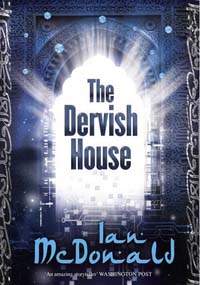 With this, his most accessible science fiction novel so far, a lot of smart money was on The Dervish House to finally pick up the Arthur C Clarke Award for Science Fiction Literature at this years ceremony. Alas, twas not to be, but this, the fourth book on the short-list to be reviewed must have made it a very close run thing.

Set in an Istanbul of 2027 as Turkey is about celebrate the 5th anniversary of ascension to the European Union, the book covers a seven day cycle of events that starts with a bang - literally - when a suicide bomber detonates an explosion on a commuter bus. Curiously, only the bomber is killed but she sets off a chain reaction that weaves together the lives of six people, through three stories, which all connect in some way to the titular abode.

Our first character is Necdet, a young man with a somewhat suspect past now living with his brother and working with him as part of a fundamentalist Islamic order. Next is Can, a nine year old boy with a rare heart condition that keeps him mostly house-bound and forces him to wear earplugs in case a sudden, loud noise triggers cardiac arrest. Can's constant companion is a computer-controlled nanotechnology robot that can change shape from Monkey to snake to bird and he uses these as surrogate eyes and ears, moving stealthily around the city, peeking and prying into the lives around him. Can's guilty secret is that he sneaks out of his room to hang out with Georgios, an old Greek man and retired experimental economist whose fall from grace came when he was arrested during a revolutionary demonstration in the 80's. Georgious has been living under a shadow ever since but after the bombing he gets a sudden call to join a curious government think tank. Then we meet young couple Adnan and Ayse. Brash and confident Adnan is a commodities broker from a poor fishing background and when we meet him he is putting in an offer for an apartment with a river view in the Dervish House, that he aims to pay for with an audacious and illegal plan to buy and sell a huge quantity of gas, using his companies resources, but without their knowledge. It's daring and he has various partners-in-crime to control but if successful it will set him up for life. Ayse, while just as confident, is more thoughtful and considered. A dealer in fine arts and religious antiquities she plays at the high-end of her profession but is tempted off the straight-and-narrow with a huge commission to find the legendary Mellified Man, a corpse mummified in honey, the consumption of which can cure all ills, and while it's usually considered a myth, if anyone can find it, Ayse can. Lastly we meet Layla, on her way to a job interview her plans are waylaid by the bomb and she can ill afford to miss any opportunity. Layla has fought her way out of a life of farming to a degree in marketing and is desperate to make her way. Layla's second cousin owns a nanotech start up that stands at the edge of a massive revolution in the technology but they need someone to helps them raise funds. With little option she takes the gig but before they can start she has to track down the other half of a miniature Koran in order to free the company from a partnership obligation.

There is so much to crow about in this book it's hard to know where to start. McDonald brilliantly imagines a world where consumer-grade nanotechnology is commonplace in everything from mobile communications to kids toys but also how it effects the complex, multi-layered city of Istanbul where everything - religion, business, culture, tradition, technology - has two halves, even the city itself is divided in two. Then again the city is as much major character as anyone else in the richly drawn and brilliantly realised cast. A grand puzzle, Istanbul is painted as the city at the heart of the nanotech revolution, a futuristic hotspot nestled among buildings thousands of years old, a population of 100 million after a seismic cultural shift of huge proportions but still beholden to family and faith above all else, with women managing, but still fighting, for equality in all things, a country of opportunity where the smart can earn riches beyond dreaming but still one of the poorest of the EU nations. McDonald's imagination gives full reign to this world and each piece, each minute and beautifully crafted detail immerses the reader further and further in it.

The story itself, while a little convoluted, is a very plausible take on the rise of fundamentalist terrorism that, even with the nanotech spin, has a ring of truth to it based on numerous seen but barely understood evening news stories. Despite the big start it is a bit sprawling at first and takes time to establish itself but such is the nature of multiple narrative story lines and it soon turns the corner as the various strands weave themselves together. The pacing though is uneven, a number of times I found one storyline kicking into gear and getting really exciting only to be whisked away to catch up with a different, less interesting one and rather than working seamlessly to bring the stories together it jolts, leaving ragged edges rather than smooth segues.

Another small quibble is that some aspects of the story, the Mellified Man being the best example, just weren't explored fully enough often at the expense of something else quite mundane, and **SPOILER ALERT** given that myriad people had been searching far and wide for him for hundreds of years it was too convenient that Ayse found him in a few days, in central Istanbul, in the pipe work below a municipal building.**END SPOILER ALERT**

But all that aside, The Dervish House is a fascinating and hugely enjoyable book. The various strands of the story fit together perfectly and, at the end, the various final outcomes, a satisfying mix of surprising and inevitable, are tied together in just the right way. Should it have won the ACCA? Well if it hadn't been for Lauren Beukes rip-roaring Zoo City then I think it might well have done. It's a bit 'clever clever' and maybe a tad too 'literary science-fiction' for some but it would have had my vote, without doubt. Would it get yours? Do yourself a favour, buy a copy and find out.

The Dervish House is published by Gollancz and is available from The Book Depository, Blackwell and all good book stores.

Ian McDonald has the obligatory blog and also tweets.