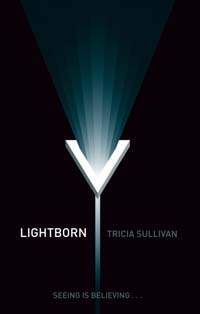 Every year, once the Arthur C Clarke Award shortlist is announced I gather together the nominees and set about reading them all. It's a mixed bag each time but there are usually one or two stand-out contenders in the six-book field and often a clear favourite, but this year's list was, I think, the best yet, with at least four of the shortlist capable of walking off with the prize. Sadly though, Lightborn was not one of those.

Set in America it tells of a world afflicted by 'Shine'. Shine is a technology, a transport mechanism if you will, that uses lightwaves to embed information, education and entertainment directly into the mind. Unfortunately there is some kind of glitch and the population of the fictional city of Los Sombres begin to suffer massive breakdowns, madness, violence and more, and the US government, finding themselves with no way to control this menace, decide to isolate the place, setting a border around the city with no way in and no way out. But not everyone is affected by Shine. Pre-pubescent children seem to lack the brain function to receive the transmissions and some adults, usually criminals of some kind, have been 'burned-out' as part-punishment for their crimes and so also lack the necessary cerebral pathways.

Our story centres around a boy, Xavier, living on a reservation outside the city, desperately warding off puberty by eating bottles of Kisspeptin inhibitor. Following the arrival of a bizarre stranger, someone does a runner with the last of the Kiss so, with fear of getting Shined in his head and partly to impress a girl, Xavier takes off for the city to track down any remaining supplies. Once in, he bumps into a young woman named Roksana, seemingly unaffected by Shine, eeking out the best life she can by foraging and growing her own food. After a typically frosty initial encounter the two soon team up but eventually realise that there is more to the truth about Shine than they were led to believe and it is a discovery that will change both of their lives, and the rest of the world, forever.

I struggled to get into Lightborn from the beginning. The plot is nothing particularly new, survival novels are ten-a-penny these days and more frequently than not they seem to have child protagonists. The problem with this one is that he's basically a whiny, self-centred little melt without a single redeeming quality. Don't get me wrong, I understand that teenagers are like that sometimes, but it doesn't make for a compelling protagonist. Similarly Roksana, while not quite as bad, is too self-absorbed to be truly likeable and the rest of the supporting cast are either violent psychopaths or Shined madmen which leaves little of any interest to the average reader.

Having said that it's a quick read and not too taxing on the brain. The writing does have some nice touches, the dialogue, for the most part, is good fun with some wit and humour which works well against the grim surroundings of the post-apocalyptic world and the use of song titles for chapters and prog-rock concept album titles for sections is positively inspired. Unfortunately though, the rest is not and the whole comes across as a little tired and a little dated adding nothing new to the genre.

It's easy, in hindsight, to say that Lightborn wasn't going to win, but despite Sullivan's pedigree (She's a previous ACCA winner having collected the gong in 1999 for Dreaming In Smoke) Lightborn is lacking in lots of areas. The plot is simplistic, the characters two-dimensional and the pacing uneven at best but most of all it lacks ideas, and ideas are the stock-in-trade of science-fiction. I struggle to understand how this made it onto the ACCA shortlist it's that ordinary. Maybe because it was three years in the waiting it was felt more worthy than it actually is, maybe it's just because she's won it before... Who knows? Either way, when I think of the books that made way for this, I have to wonder.

Lightborn is published by Orbit, through Little Brown, and is available from The Book depository, Blackwell and all good book stores.