My Story Can Beat Up Your Story! 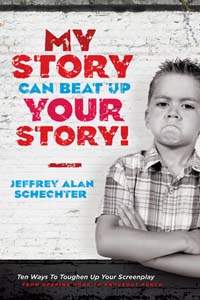 Flat out this is one of the best screenwriting books I've ever read. No, really, I don't say this lightly. I've been struggling with plot construction and outline on a couple of ideas for a long while now and in less than 10 chapters Jeffrey Alan Schechter unlocked a process for me that just worked - beautifully - and it was like a veil had been lifted from my eyes. Seriously, it was that much of a revelation. I'm actually carrying this book around with me at the moment.

What he does in this book is take all of the core tenets of screenwriting, the theme, the central question, the characters and their archetypes, inciting incident, rising action and so on and then sets them out in a way that makes them really simple and easy to understand with real examples to illustrate the lessons. Then - and here's the genius part - he layers them on top of each other, as he goes, so that you can see how all of the components mesh together to create a bulletproof structure with all of the plot points mapped out, in order. Chapter 8 is the key chapter and to be honest it would have been worth the price of admission for this alone, but the other really key chapter for me was chapter 6. Here Schechter deals with characters and what he calls the 'Unity of Opposites'. This is how your characters play against each other, in pairs, with defined roles, and how their actions and dialogue will be defined by those roles. The key here being that if we know how every character will behave, we know which character(s) to include in which scenes in order to tell our story. So much of what was written just in these two chapters will inform my own writing from now on.

Sure, as a book it's well written, Schechter has an easy style and cracks a few jokes along the way. There's a bunch of downloadable templates on the MSCBUYS website so you can get started with these methods right away and there's a beat-by-beat breakdown of five top films to illustrate the lessons and some other stuff in there about the quick pitch and starting out on a career in screenwriting, but the real meat is in the sections on plotting and script structure and it's those chapters you'll be constantly referring to. But don't just take my word for it. Stop reading now and run like a nut-job to your nearest book store and buy a copy. You'll be glad you did.

My Story Can Beat Up Your Story: Ten Ways to Toughen Up Your Screenplay from Opening Hook to Knockout Punch

is published by Michael Wiese Books and is available from Amazon

, Blackwell and all good book stores.

That nice Mr Schechter is clearly a digital ninja of a higher level than most mere mortals and he's been a busy boy online. You can download a free sample of MSCBUYS over at Scribd and their is also a dedicated website for all those downloadable templates and notes. There is a missing 8th chapter that Jeffry apparently forgot to write on 'Doubling Up' which you can download absolutely free over at The Writer's Store and while your there check out Contour, the story construction software based on Schechter's principals. Finally there's a podcast a Facebook Page and a Twitter feed.