Secrets Of The Fire Sea 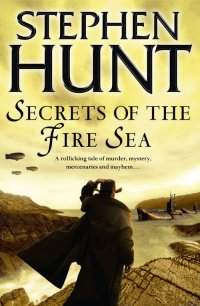 Secrets Of The Fire Sea is the fourth book in Stephen Hunt's Jackelian series and while they do seem to follow-on from each other, cleverly, the main characters change and the continuing characters only play minor roles in each others stories, so each book can be read as a standalone novel. For those who don't know these books, they fall squarely into the 'Steampunk' sub-genre and feature all the tropes that it brings, airships, steam-cars, steam-driven computers, big machines and so on because electricity is far too unstable to use on a day-to-day basis, but they also feature different species that live alongside humans and that means different credos and religions, which creates a natural conflict, there's even a non-religion religion called the Circlists, and my favourites, the 'Steammen', a robot-species that have evolved to become sentient and have their own set of beliefs and traditions.

This book is set entirely on the island of Jago, surrounded by continually erupting magma known as the Fire Sea. Things are not fairing well on Jago, the population is in terminal decline and emigration from the island is strictly forbidden. The only people who can come and go at will are the Ursine people who have discovered a route through the magma that they can use to trade and they hold the Jackelian's to ransom for food and most other goods which has created general unrest and antagonism in the peoples of Jago.

Against this backdrop, an attempt is made on the life of Hannah Conquest, an orphan adopted by the Archbishop of the Circlist Church, and the Archbishop herself is murdered. Jethro Daunt, investigator of some renown is despatched by the Church to find the murderer along with his Steamman sidekick 'Boxiron' but what they find is a ruler suffering increasing madness, corruption and political power struggles between the Church and the Guild of Valvemen, with Hannah at the centre of the struggle, and the Ursine and Jackelian populations on the brink of war - or civil war - unless something can be done to stop them. On top of this, the murder investigation leads Jethro to something from his past far more personal than he wants to face and puts Hannah, and the mystery of how she came to be orphaned, at the centre of everything making her the next target.

Despite its confined setting the scope of the book is pretty big and Hunt takes every opportunity to move the story around, venturing out of the city and into the interior of the island and back again to keep things interesting. The plot is fairly complex weaving together several factions and a fair number of characters but it's written in easy language so you never get lost and with excellent pacing and plenty of action to keep you engaged from the get-go.

The cast, on the whole, is great, the characters, while not particularly complex, are well-rounded and distinct from each other especially the leads, and one or two, Commodore Black in particular who we have met before, are truly memorable with dialogue that is generally pretty sharp with some decent humour and witty one-liners. If I have one grumble it's that they are too recognisably 'the good guys' and 'the bad guys' so there's little ambiguity about their motives and you are under no doubt as to who you should root for at any time. As you would expect if you've ever read any of his other novels, the world-building is superb with a truly imaginative flair that takes the hoary old tropes of steampunk and elevates them far above the morass, not just with the 'stuff', the technology and so on, but with the very lands where the story takes place and the peoples that inhabit those lands.

All in all another terrific adventure tale from an excellent story teller. As a mystery it twists and turns well with enough surprises to keep you guessing and as with all of Hunt's books, you never really know who is going to make it to the end. Well worth checking out.

Secrets of the Fire Sea is published by Harper Collins and is available from The Book Depository, Blackwell and all good book stores.