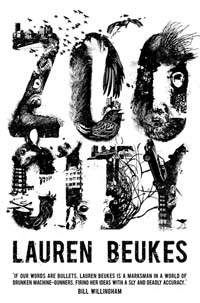 This, the third book of the six that were nominated for the 2011 Arthur C Clarke Award, was by far and away the most likely winner on the list. Why? Well I'm glad you asked. You see in this reader's humble opinion it was the only one with a genuine pull-you-along-for-the-ride decent story inside, a murder/mystery/thriller set against a sci-fi backdrop that compelled you to keep reading until you got to the end and found out what happened. Not the cleverest, funniest, best-written, smartest or most technologically interesting of the six, but by far and away the best story, and really, that's what makes a great book.

The story is set in a South Africa where those guilty of serious crime become 'animalled'; literally they develop an animal familiar as an external expression and visible display of their guilt, carrying the animal around, feeding it and caring for it like any other animal. Zinzi December, our heroine, has become one such person. Zinzi developed a sloth after killing her brother, and she now lives with other 'Zoos' in a run-down district known as Zoo City. Sloth, like other animals, is not just a dumb pet, it has it's own mind and will rail against Zinzi's decisions like a kind of Jiminy Cricket on her shoulder. A person and their animal cannot be separated though, if they are then both will suffer agonies and if the animal dies the person is taken by The Undertow, a black mist that swallows them whole and takes them to who knows where.

In Zoo City Zinzi ekes out a living running email scams for a gangster to whom she owes a huge debt from her previous life as a drug addict, and also by finding things for people by dint of a supernatural talent she acquired as a side-effect of her animalling. After taking a simple job and her client turning up brutally murdered, Zinzi goes against her better judgement, and normal rules, and takes a job finding someone who's gone missing. Ordinarily she'd steer clear of missing persons but times are tight and this job - finding a missing popstar - offers the chance to clear her debt once and for all but for Zinzi living long enough to collect is going to be her biggest problem...

So accomplished is Zoo City that It's hard to believe it is only Lauren Beukes second novel, and while elements of her world are borrowed from elsewhere, most notably the idea of the animal familiar coming from Pulman's 'His Dark Materials' trilogy, she takes the basic ideas and re-imagines them into her world in such imaginative ways that they become her own. The characters, all of them not just the main cast, are beautifully drawn and realised with real depth, differentiated not just by dialogue and viewpoint by the animals they carry with them and Zinzi, though weighed down by her past, slightly cynical and sharp witted, is perennially upbeat against all odds and thus easy to route for. Zoo City, itself almost a character, is rich in detail. A ghetto like others we've come to know in South Africa it's inhabitants are making the most of a bad situation but poverty and bigotry bring about the inevitable social decay and desperate violence reminding us that there's a reason these people have animals, and it's not 'cos they're cute.

As mysteries go it's pretty good. The bad guys are signalled pretty much from the beginning but it's piecing together the motives that takes time and keeps you guessing till the end and when all is suddenly revealed it's the right motive in so many ways. The pacing is terrific and things move along a decent clip only pausing for breath where absolutely necessary. Zinzi is a strong female protagonist, prepared to fight but smart enough to stop and think and utterly independent in this fantastical world, a world in which she is so fully rooted that her traits are as much a part of what Zoo City has made her as what she became to end up in Zoo City.

Zoo City may be hard to categorise being part noir thriller, part crime caper, part murder mystery, a true urban fantasy shot through with sci-fi and new weird but it's a hell of a book all the same. Unless you've been living under a rock for the last few months you'll know that the lovely Ms Buekes walked away from the 2011 Arthur C Clarke Literary Award clutching the winning gong and a nice cheque, so did she deserve it? Well in my opinion yes. Like I said at the beginning of this review, not the cleverest, funniest, best-written, smartest or most technologically interesting of the six, but by far and away the best story and that, after all, is what it should be about.

Zoo City is published by Angry Robot Books and is available from The Book Depository, Blackwell and all good book stores.