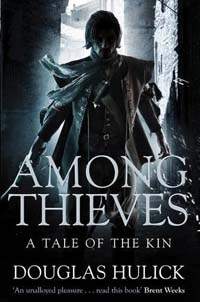 The streets of Ildrecca are a dangerous place, but Drothe has been moving amongst the Kin his whole life and you don't get as far up the underworld ladder as he has done without picking up a few tricks along the way. You see while Drothe runs a quiet little sideline in smuggled imperial relics, he is also a 'nose', someone who sniffs out trouble within a criminal organisation and takes care of it one way or another. The upside of this is that he reports directly to the Boss, the downside is he reports directly to the Boss.

Drothe is sent to Ten Ways, a part of Ildrecca where lives the very worst filth and scum of the criminal fraternity. Drothe has already crawled out of there once and he doesn't relish the idea of going back, but his Boss needs him to route out whoever's been muscling in against his men and put a stop to it. However Drothe's investigations uncover a much bigger conspiracy than just a plot against his Boss. Someone is setting gang upon gang, stirring up trouble between everyone, intent on bringing all of Ildrecca to heel, and things turn worse when Drothe discovers one of his own stolen relics on a fresh body. Then rumours of another relic, a certain book with the magical power to bring down the Empire itself begin to surface, and it puts Drothe in the cross hairs of two hugely powerful crime lords, demi-gods known as Gray Princes, both of whom want the book for their own ends.

Can Drothe tread the thin line between loyalty to his Boss, the power of the Gray Princes, the various warring factions and keep himself alive? He'll need all of his cunning, his guile and his best tricks to manage it.

I love getting hold of a decent debut, there's nothing quite like the feeling that you're about to discover something wonderful and new and it's even better when your hunch is proved right, such is the case with Among Thieves - it's terrific. Anyone who knows me will tell you that I'm a sucker for heist/caper/crime stories where the thieves are at the heart of the action but in the fantasy world very few ever seem to get written. For me there's something about the manner of thieves (in books that is) the slang, the lore, the kit, the various specialist roles - ears, blades, whipjacks, Agonymen, Jarkmen, squinters - within any criminal empire that I find fascinating and when it's done well it sings. Hulick does this very well indeed, the thieve's cant he uses adds real spice to the already rich dialogue and the sarcastic one-liners and general cynicism of the people in that seedy underworld is at times a real joy.

The characters too are nicely drawn individuals. Drothe, despite his criminal tendencies, is a likeable protagonist and his 'save the cat' moment is real enough to be believable and get you on his side. His companion and 'muscle', Degan, is a nice counterpoint and the two have some terrific exchanges, especially towards the end of the book when lines of loyalty become blurred. While there are plenty of others, a favourite of mine being Jelem, a kind of 'scorcerer for hire' that Drothe leans on for regular help - I'm looking forward to much more from him in the coming series - some, while important enough to warrant decent chunks of the story, don't get fleshed out enough but as the series progresses I have every confidence that they'll come into their own.

It's fair to say that the plot isn't the most original ever but it's reworked in a fairly slick way to fit into the world of Ildrecca and never feels tired. The pace as you'd expect is brisk and the action which takes place in the dark alleys, seedy inns and backstreets of the city is truly exciting and never really lets up from the gripping opening pages to the final stand and, as the story is told exclusively from the first-person perspective of Drothe, the mystery is only revealed to the reader as Drothe uncovers things for himself which helps to draw you deeply in while things unfold. The worldbuilding is nicely balanced within the constraints of the criminal underworld setting, details are revealed as necessary and the history of the place alongside the legends and stories that make up the culture are paid out in small pieces such that I can't remember any big info-dumps which is unusual for a debut. The magic system or 'glimmer' and the magic it produces are simple enough to understand and while there is a very light touch to the magic throughout Among Thieves there are realistic consequences for the user which adds a note of believability to its use.

The obvious though unfair comparison would be with Scott Lynch's excellent Gentlemen Bastards sequence and while it's not quite on a par plot-wise, in most other ways it can hold its own - certainly if action/fantasy with real edge floats your boat then you'd be mad to miss it.

Among Thieves is published by Tor through Pan Macmillan and is available with free delivery from The Book Depository, or Blackwell and other good book stores.