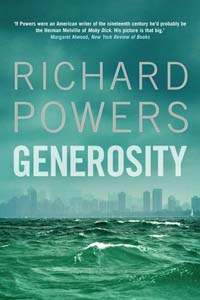 Generosity is the 5th of the 2011 Arthur C Clarke Award nominated books and, for me at least, easily dismissed as a possible winner. While there's nothing wrong with it as a book - it is in fact, excellent - it's just not a science fiction novel and I can find little evidence between the pages to suggest that it is a science fiction novel so I have to wonder how it crept onto the longlist let alone made it as far as the shortlist.

The story centres around Russell Stone, who should have been a writer but instead of taking the opportunity he carved for himself, set out down a road of self-doubt and ended up scratching a living as an editor and teaching a 'creative non-fiction' writing class in the evenings. At his first class he meets Thassadit Amzwar, Thassa to her friends, an Algerian migrant who, despite what she has seen and endured in her short, young life, exudes such a strong sense of utter joy that it seems to infect everyone around her, and everyone in her orbit, no matter for how long or how distant, seems to feel better for it. Stone can't understand her happiness, can't believe that anyone can always be permanently happy, especially someone with her background, so he begins to investigate, spending hours online and even meeting with a psychiatrist to try and get to the bottom of Thassa's 'condition' until eventually he stumbles upon something, a medical condition that might fit.

One night, following after-class drinks, one of her classmates tries to rape Thassa but she talks him down and he slinks away, so ashamed that he turns himself in to the nearest police station. During the subsequent investigation Thassa wants to shrug it off, blame the drink, tell everyone that it wasn't as serious as he makes out but when the police talk to Stone he offers his opinion, that she might have hyperthymia, a condition that makes her unusually happy, generous and warm to everyone and within days Thassa is all over the TV news, the web, the newspapers, everywhere, and everyone a piece of her happiness. So can Thassa survive the media bombardment? Will the very thing that people love her for end up being the thing that drives her joy away? And will she survive the geneticists and pharma-co's, that want to synthesise 'the happiness gene' she seems to possess and sell it to the rest of us.

Powers' work has always examined the ramifications of unchecked technological advance and Generosity is no different, but it's the huge emotional hits that his characters take that really endear us to him. Russell Stone, while spending hours researching why and what it is that makes Thassa so happy, cannot articulate in any meaningful way how he might be happy himself, and even when he starts a relationship with Candace Weld, a counsellor at the college and another emotionally disconnected soul, it's a very low-key affair, as if he - and she - are testing the waters a bit at a time, totally unaware of the happiness they are experiencing or providing to the other.

While the threesome of Stone, Thassa and Weld form the nucleus of the story, the couple forming a parental unit over their concerns for her, and she seeking them out as protectors when things start to go bad, there is another parallel storyline in which Tonia Schiff, good-looking TV presenter and the popular face of TV science is making a documentary about genetic researcher and public face of gene therapy Thomas Kurton. The relationship between these two allows Powers to ask big questions about the politics and commerce behind scientific research, about abusing the power of the press in announcing new discoveries, about eschewing proper peer-reviews in order to rush new things to market before your competitors get the jump on you. He questions the morality of this behaviour and uses Schiff to voice one side of the argument, asking too if the press are culpable in the endless search for a good story, while showing the outwardly confident Kurton struggling to maintain his status with both his backers and his staff while he delays the findings about Thassa in order to be certain of what he really has and, more importantly, what to do with it.

The book questions everything and never once offers an answer, let alone an easy one. It questions how scientific research is conducted, it questions the morality of commercialising scientific discovery, it questions the role of media - big and small - in all of this and it questions the behaviour of the individual in aligning themselves on either side of the equation. Written in a vaguely post-modernist style by a narrator that may or may not be Powers himself the story constructs itself as it goes, with details being omitted at first while the narrator struggles to 'see' them and then becoming embellished as we move forward, the reader almost a part of this 'discovery writing' process. While it's a clever trick and not one I've seen too often, it does nothing for the pacing of the story and could be accused of making things ramble in places, but it's more intriguing than irritating and I wouldn't hold it against him.

It is a fascinating novel on many levels and will reward those who take the time to digest it and re-read it with a depth and richness of story that comes along only occasionally, stimulating the kind of thoughts and questions that we should be asking but rarely stop to ask. Should it have won the ACCA? Well like I said at the start, it's not, for me at least, a sci-fi novel. It's a brilliant, fascinating, insightful and compelling book that has some science in it. It's emotionally deep and intellectually stimulating and asks big questions, and in any other competition should happily stroll away clutching the gong - but it's not a science fiction, so not the ACCA.

Generosity is published by Atlantic Books and is available from The Book Depository, Blackwell and all good book stores.