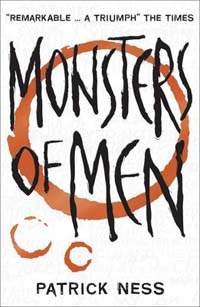 The sixth and last of the 2011 Arthur C Clarke Award nominees is 'Monsters of Men' by Patrick Ness and is different from the others in a couple of ways. First off, it's a YA novel - albeit one with a rare boldness and level of complexity within the genre - which is something of a rarity for the ACCA's and secondly, it's the last of a trilogy, the 'Chaos Walking' trilogy to be precise, following on from book one, The Knife Of Never Letting Go and book two, The Ask And The Answer. Now I'll be honest right off the bat here and say I haven't read the other two books and so I approached it with some trepidation. I don't like coming in at the end of a series as a general rule because you don't have all the pieces of the puzzle and often big chunks of the story don't make a great deal of sense, thus it was for me, with Monsters Of Men.

Briefly, we join the series in the midst of a three-way war. In the middle are the good burghers of Prentisstown, with The Spackle, bent on revenge against the humans for the torture and enslavement of their people, marching on them from one end and The Answer marching from the other. The two protagonists, Todd and Viola, split up to try and stop the destruction with Todd remaining in place to keep an eye on Mayor Prentiss who has been freed to help defend the city and Viola heading off to find The Answer and recruit them to the cause. In the midst of this they both face the biggest tests of their faith in each other yet.

Clearly the title comes from the subject matter where 'war makes monsters of men' and this theme is revisited over and over during the course of the story. Told mostly from the view point of either Todd or Viola there is a third voice in the shape of one of the Spackle that comes in and makes things a bit more interesting but, for me, these view points jump around a bit too much to for a fluid narrative, much like watching a music video that cross cuts every second, and their were many times where I had to take stock to figure out who was leading the story. This wasn't helped by the two separated protagonists spending so much of their allotted time mooning over each other. Clearly they are both besotted, please just let them figure it out and move on. I realise that this kind of intense, angsty romance is part and parcel of YA novels these days but every time I thought about how good Monsters of Men was, one of these moments came along and burst that bubble.

But these things don't overshadow too much what is a book with unusual depth that explores the moral complexity of war and of conflict. Throughout, he forces difficult choices on the characters; kill thousands to save the one? Seek vengeance or forgive-and-forget? Can we trust each other enough to fight for the greater good? Should we value your own privacy above collective knowledge? These are hard choices for anyone so to see them laid bare for a young audience to weigh and measure is to be admired, moreover, Ness does not allow them easy answers and in doing so he encourages the kind of thinking that I despaired of ever seeing in fiction for this age group again. Hat's off to him.

In the end though, as a finale and bearing in mind I'm coming to this new, it kind of dodges a bullet at the end. As all good novels do it focuses on character rather than plot and the war kind of takes a back seat because in the end, as we all know, no-one really wins a war, but we end up with a weak ending that, while it seems to tie up most of the loose ends also leaves us with some stuff open, hoping for a possible return and for me it was very unsatisfying.

So should it have won the award? Well for me, no. While it is without doubt rich and complex in places, asks questions and provokes thought, it is also angsty, irritating and trite in equal measure and I can't help wondering if a love of the previous two novels in the series gave it a leg up in the minds of the judging panel. Probably not and I'm being disingenuous to suggest it but it's not a polished enough piece for me.

Monsters of Men is published by Walker Books and is available with free delivery from The Book Depository or from , Blackwell and other good book stores.