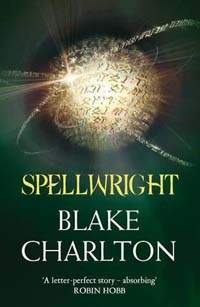 Blake Charlton's debut fantasy has been much talked about by fantasy fiction lovers as one of the new 'great' debuts but it's kind of difficult to see why. First glance at the cover blurb tells you its about wizards who use the power of words themselves to 'spell' their magic (geddit?) which is different enough - at least I've not heard of it before - and much has been made of Charlton's own dyslexia which, beyond being an obvious contributor to the personal source of this story, must be hard to deal with at any time but even harder if you want to be writer, but beyond that it has the feel of a old fashioned fantasy novel.

The entire story is set in a kind of wizards college called Starhaven. Our would-be hero is one Nicodemus Weal, a 'cacographer', a wizard that cannot spell, so all of the runes and spells he tries to cast get misspelled or corrupted rendering them either ineffective or downright dangerous. Nicodemus is apprenticed to Magister Shannon, a wizard of some renown who once thought his ward was The Halcyon, mentioned in an ancient prophesy as the saviour of mankind, but despite being wrong about that he has kept Nicodemus on as his student.

As wizards and mages from around the world gather at Starhaven for some kind of wizarding conference, one of the Masters is brutally murdered. The evidence points to Shannon as the prime suspect and pretty soon he is under investigation and being watched at all times and this inevitably puts Nicodemus under suspicion, especially as cacographers have something of a reputation for madness amongst other wizards. Can they solve the mystery, stop others and themselves from suffering the same fate and save the world? What do you think?

So there you have it, a debut fantasy novel chock-full of the usual tropes, a terrible danger to the world, an old bearded wizard, mentor to a clumsy young student (in this case one that can't spell) who may or may not be the subject of an ancient prophecy and the whole thing set in an enchanted wizards college with tall dark towers and secret passages, it's real boys-own fantasy stuff, honestly

But it's not really as bad as it sounds. Despite what I say Charlton's writing is fairly fresh and not too flowery, the characters are distinct within the confines of their archetypes and the dialogue is usually pretty crisp and ultimately believable. There is minimal world-building in the grand scheme of things because of the enclosed setting but there are numerous chunks of exposition during the course of the reading which do slow the story down, although Charlton tries hard to conceal them in a reasonably artful way. One in particular takes the form of a 'first class' for both teacher and students which is quite nice, and as the magic system and history of the world that Charlton has created needs to be explained that is no easy task.

I did have one big problem with Spellwright though which goes to the core of the story and that is the action. I just find it hard to get excited about magic that requires you to, literally, spell out a word in order to use it as a weapon. As a fast-strike way of fighting it doesn't make a lot of sense for this reader and while the action sequences are decent enough it always seemed that while someone was casting the runes to make the spell to aim at you there was enough time to counter the spell and get out the way and I never really felt like their was any danger in it for the main protagonists. Big swords and traditional violence on the other hand all worked well!

All in all Spellwright, though it could have been written in 1995, is a pretty decent read. The ending is way too long and is blatantly setting up new battles for book two - in fact maybe should have been the opening for book two - but I wouldn't mark it down for having too much story. It's not breaking any truly new ground but the magic system is intriguing and, without the need for great gobs of info-dump should really come into it's own as the series progresses. Either way, if you like fantasy of a more traditional style then you'll definitely be a fan.

Spellwright is published by Harper Collins and is available with free delivery from The Book Depository or from Blackwell and other good book stores.