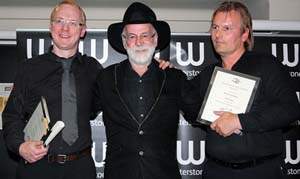 SCI-FI-LONDON was lucky enough to be invited to the award celebrations marking the end of Terry Pratchett's first Anywhere But Here, Anywhen But Now writing competition for previously unpublished authors of science fiction and fantasy.

The author of 50 discworld novels said the competition was open to "Stories set on Earth, although it may be an Earth that might have been, or might yet be, one that has gone down a different leg of the famous trousers of time." "Maybe the continents will be different and the climate unfamiliar, but the physics will be the same as ours. What goes up must come down, ants are ant-sized because if they were any bigger their legs wouldn't carry them. In short, the story must be theoretically possible on some version of the past, present or future of a planet Earth."

There were, by all accounts, more than 500 entries vying for the prize of a publishing deal with Transworld and a cheque for £20,000 and from the shortlist of six the award, surprisingly, ended up being shared by two authors Michael Logan for 'Apocalypse Cow' "...the story of a group of social misfits thrown together after the government accidentally unleashes an experimental bioweapon, with peculiar repercussions for Britain's farm animals" and David Logan (no relation) for 'Half Sick of Shadows', described by Transworld as "A darkly atmospheric, richly written coming-of-age novel in the spirit of Iain Banks's The Wasp Factory."

The panel of judges comprised Pratchett, Tony Robinson (of Baldrick fame) and experts from Transworld Publishing and Waterstone's. "It was a long deliberation and although to some it might seem a cop-out to split the prize, we decided that since the award existed to find new talent then this was the happiest decision to make," said Pratchett, "Half Sick of Shadows and Apocalypse Cow both stood out in their different ways and I wish their creators the best of luck in their writing careers."

"Ever since I wrote my first short story at the age of eight, it has been my dream to become an author – although the idea for a novel about sex-crazed zombie cows did come a little later," said Michael Logan, a Scottish ex-pat now living in Kenya. "The full impact of attaining a lifelong goal has yet to fully sink in. I'm sure it will hit me on the way home, when I will bemuse all around me by performing a victorious knee-slide across the concourse at Gatwick."

David Logan, from Carrickfergus, Northern Ireland said he felt "...very lucky" to win the prize. "I am disappointed for the runners-up. The difference between winning and losing is a hair's breadth."