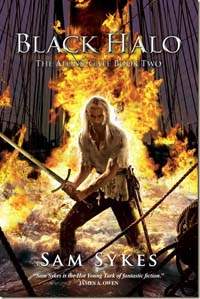 It's fair to say that this was one of my most anticipated novels this year, having thoroughly enjoyed it's predecessor and then interviewed it's author when he was over. I have to say though that Sam Sykes sophomore outing is a mixed bag, still thoroughly enjoyable, still infused with same exuberant mix of poetry and violence but with less bawdy, irreverent humour, less wit and in general it's a book that's harder to lose yourself in.

Tome of the Undergates had the motley crew of adventurers - Asper the priestess, Danaos the assassin, Kataria the Schictish warrior, Gariath the Dragon Man and Dreadaleon the wizard - setting sail in pursuit of the eponymous Tome, led by Lenk, for no good reason that anyone can think of other than the promise of a lot of gold to share at the end of it. Needless to say things went pear-shaped pretty rapidly and they ended up in a furious battle between huge purple-skinned warrior women and netherlings from under the sea all of whom want the Tome for their own ends. Black Halo picks up with the sextet adrift on the sea, desperately in need of water and food, until an encounter with a sea monster leaves them all washed up on an uncharted island made from the bones of the dead from a long forgotten war.

Tome of the Undergates was a great book, and what made it great was that these were not a heroic band of brothers, oh no, these were a wretched band of dysfunctional villainy always just one step away from killing each other but also, though they'd never admit it, always there to watch each others backs, if only so they could publicly ridicule each other afterwards. It was that banter, that call-and-return that lifted it out of the morass of fantasy novels and made it so much fun. Unfortunately, Black Halo sees the party split up for the bulk of it's pages, wandering around the island in search of food and shelter, possibly in search of the others, but mostly in search of themselves, and it's this isolation of the characters - this loss of the group dynamic that made book one so good - that lets it down for me.

That's not to say that it's uninteresting, it's not. Each of these characters is utterly compelling, rendered with care and given the kind of depth and substance that a great many fantasy writers can't get near. Each has their good points, bravery, tact, strength, diplomacy, but also their flaws, self-loathing, loss of identity, fear of madness, loss of humanity and while, as a group, we see a balance of each, alone all we see - all they see - are the flaws. In a lot of ways this kind of extended introspection amongst fantasy characters is unique. They mull over how they got here, what what brought them this low, one via internal conscience, one from external conscience in the shape of extremists from her tribe, another with visions of ancestors, one with visions of the past and in one case with real voices in his head, and all the time they try to justify, try to balance things, weigh the price they are paying for the life they are leading, but while it's interesting, while it's good writing, ultimately it goes on too long, revealing much of character but at the expense of doing little to move the story forward.

But it's a strange man indeed that moans and whines about good writing so don't let that put you off, the action, even though there is less of it, does come and when it does, it's as frenetic and brutal as we've come to expect from that nice Mr. Sykes. Steel clashes, flesh is sundered and blood flows and there is nothing heroic in the aftermath, not for anyone in Sykes fantasy world. Incidentally, the world-building, as before, has a nice, light touch only revealing what is necessary to the story and never resorting to onanistic, flowery description to pad things out, but it's a different story with characters; humans, schicts, dragonmen, akaneeds, abysmyths, frogmen, wizards, lizardmen, priests and priestesses, demons and gods - the list is almost endless and clearly this is where Sykes lives and breathes, but interestingly, despite the fact that everyone and his dog is after the Tome, I've still no idea why. It'll either be fun when we find out or it's the absolute godfather of all MacGuffins.

So I'm left with questions about Black Halo. It's a good book, of that there is no doubt. Sykes' prose is amongst the best in any genre and he carefully places lovingly crafted characters in this soupy grey area of definitely-not-heroes-but-not-truly-villains-either, not with a quip, nor with a deed, but by revealing them at their most vulnerable, torn apart by the past, not wanting to accept the future but unable to escape either. So they cannot stand still, they must move forward but at what further cost to body and soul? That this breaks new ground in Epic Fantasy can, and will, be endlessly debated. Is Sam Sykes the torchbearer for a smarter, more considered type of fantasy writing? Is this a deliberate move in a new direction? Or is he so blissfully unaware of the usual rules and tropes that he writes what he feels like and it falls where it may. I don't know, though I suspect it's a little from column A and little from column B, but one things for certain, I know that I will want to read his work for a long time to come.

Black Halo is published by Gollancz and is available with free delivery from and from Blackwell and all good book stores.

Sam Sykes has a website and Tweets a lot.