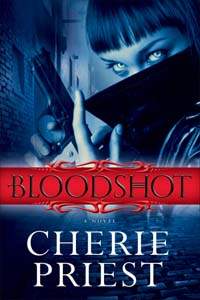 I wasn't sure about this when it turned up, I don't generally read the kind of urban fantasy that revolves around chicks that dig vampires and this looked like it could easily be lumped into that bracket. What stopped me from dismissing it entirely was the author, Cherie Priest, whose 'Clockwork Century' series of steampunk novels I'd enjoyed immensely and whose style of action/adventure draws me in so I thought I'd give it a go and I'm glad that I did.

Told in the first person, the book centres around Raylene Pendle a century old vampire that makes her living by stealing priceless art and rare jewels to order under the name of Cheshire Red. This makes 'Red' something of a thief-celebrity so Raylene has become very security conscious with multiple identities, bank accounts and homes around the US that she can slip into or out of at any time. Raylene's troubles start when another vampire, Ian Stott, asks her to pull a job for him, but rather than the usual valuables, he wants her to steal government secrets. Normally she'd walk away but a couple of things pull her in; he's very charming and very good looking, which always helps, but he's also blind which should be impossible for a vampire and these secrets could hold the key to his blindness. Predictably the B&E goes awry and pretty soon Raylene is up to her ears in government agents trying to cover-up the top secret, biological experiments known as 'Project Bloodshot' that were responsible for Ian's blindness, and Raylene has to take duck underground and take refuge. Ultimately though, she has to come out fighting and so, with a psychotic, power-hungry scientist on her trail, Men-In-Black popping up all over the place and an ex-SEAL drag queen by her side Raylene starts kicking ass!

Right from the get-go, Bloodshot is terrifically good fun. Raylene is a real kick-ass heroine, feisty and independent with vampire speed and strength that lends itself perfectly to her profession and she's not a good girl. She maims, she kills, she drains blood, she buries bodies in her warehouse basement and she's emotionally detached, selfish even, refusing to accumulate what she calls "pet people", everything in fact that the vampire genre needs in a new heroine. But Priest has gone one better than that. Raylene is also slightly OCD, she's a hoarder, she plans meticulously and compulsively, over and over,she lines up her pens and she has a giant soft spot for homeless kids, two of whom she looks after and she has a sidekick, a drag queen, albeit an ex navy SEAL. So underneath the hardened, ruthless, killer exterior there is a soft spot and it endears her to you.

The plot comes across at first glance like a standard heist/thriller with elements of mystery thrown in and certainly the ingredients are all there, but it does turn into more of an action/adventure halfway through which slows things down a bit. That's not to say that it loses momentum entirely, it doesn't, and there's thrills enough for anyone, but unlike the standalone novels she usually writes this is a trilogy and I can only assume that this switch in pacing is designed to accommodate the larger story, especially as the build-up leaves us perfectly set up for the sequel. Also, there's precious little magic or fantasy beyond the fact that there are vampires in the world. There's no werewolf nemesis or fallen angel foe to deal with, which is how it should be I think, and as a result Priest works the characters harder and doesn't distract from the offbeat, hard-boiled style.

But what makes Bloodshot so enjoyable is undoubtedly Raylene. Her snappy dialogue and snarky, aggressive style are a riot and if you're a fan of Priest's other novels, an urban fantasy reader that's all vampired out or simply looking for a vampire story that isn't a twinkly, emo, gloom-fest then I'd recommend Bloodshot. It's a quick read but utterly enjoyable and, I'll even admit, I'm looking forward to the sequel, Hellbent, due in September.

I recently interviewed Cheri Priest about Bloodshot and you can listen to it here.

Bloodshot is published by Titan Books and is available with free delivery from The Book Depository or from Blackwell and other good book stores.