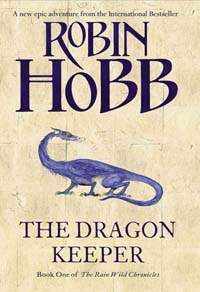 After an absence of almost a decade Robin Hobb continues on from the hugely popular 'Liveship Traders' series with this, the first of a new trilogy, The Rain Wild Chronicles, and it continues pretty much where the last book left off.

After migrating to the Rain Wilds the dragons emerged from their cocoons as fragile beings, only a shadow of the once mighty species. Unable to fly they rely completely on humans from the city of Cassarick for basic survival, for feeding and grooming. But this takes its toll on the city so Sintara, erstwhile leader of the dragons, sets a plan in motion, together with the humans, for the dragons to emigrate to Kelsingra, an Elderling city surrounded in myth and hidden deep in the uncharted regions of the Rain Wilds.

Handlers are chosen to go with them, Dragon Keepers, one of whom is eleven year old Thymara, a girl living as an outcast in Rain Wilds with her father because she was born with claws instead of finger nails. Rather than see his daughter left out to die in the wilderness, as tradition dictates, her father rescues her and subsequently they are now forced to live in shame. Thymara sees her acceptance as a Dragon Keeper her true destiny and sets off away from home for the first time. Another keeper is Alise, a Bingtown trader's daughter, who has studied dragons and dragon lore her whole life. Trapped in a loveless marriage to a wealthy trader who only married her for comfort, she is finally to see her lifelong dream of visiting the dragons in their natural habitat fulfilled. She arrives with her assistant, Sedric, just when the emigration begins and decides to accompany them as a dragon expert on-board the Tarman, a liveship owned by Captain Leftrin, a man with secrets of his own and a growing affection for Alise.

Dragon Keeper has everything you could ever need for a great fantasy saga, an exotic and distant world, with dragons, a people surrounding them who have evolved dragon-like features, hints of unconventional love, greedy men with bloodthirsty minds, and myths and mysteries around a forgotten city. This is a skilfully written book, which is no real surprise since all of Hobb's books are just that, her ability to world-build is amongst the best in the genre and it takes only a few pages to get lost in the worlds she creates. I don't think any of her previous work accomplished this as fully for me as Dragon Keeper. The first part of the book deals with the dragons and suggests a mystery about the emigration and the dragon's true feelings towards the humans surrounding them, a teaser which will probably become more developed as the series continues.

Her characters as usual are well developed and during each switch of viewpoint more pieces falls to place, but she cleverly conceals secrets and mysteries from the reader keeping them on their toes throughout the book. Hobb also makes it easy to care for the characters she creates - vital for any book I think - and, as in her previous books, I can visualise and get a feel for them straight away. But it's not just the main characters that are captivating, her minor players are equally fascinating and you want to know more about them and their part of the story as you read. For instance, Hest, Alise's abusive and distant husband, is a character I want to read more about. He is obviously a loathsome man but during the latter part of the book we find out more about his background and I would hope to see him developed more in the sequel, Dragon Haven. Hest's assistant, Sedric, is another supporting player who captivated me. His true feelings and personal agenda about chaperoning Alise on this journey are slowly unveiled through the book. She also include a few minor characters from other Liveship Traders novels and it is always delightful to recognise names and places from other parts of the Hobbs' universe.

Like her other series openers, The Dragon Keeper has a great deal of introduction, so consequently the pace is generally slow. No major war erupts, no passionate love is made, so I imagine readers seeking a bit more action could find it slow going. But having said that, if you appreciate skilful and enthralling writing that grips you from the start, not letting go until the very last word, you will love this book, I did, and I for one want to read the next book right away to find out what happens next to the Dragon Keepers.

The Dragon Keeper is published by Harper Voyager and is available with free worldwide delivery from The Book Depository, or from Blackwell and other good book stores.