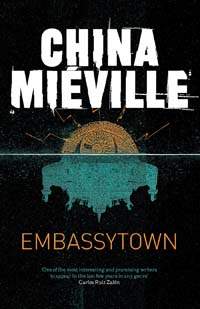 I've read five of Miéville's novels now and with the exception of The City & The City, which I thoroughly enjoyed, my response is generally somewhere between awe and confusion. I know I might not be the sharpest tool in the shed but I've said before that I often can't tell if his ideas are breathtaking in their originality or if he's just taking the piss and Embassytown falls right dead centre between those two stools.

Embassytown is a city-port on the outskirts of the universe on the planet Arieka. Our story revolves around Avice Brenner Cho, an immerser, a traveller on the immer, who escaped Embassytown but, unusually it seems, has returned to her birth planet. But Arieka is home not only to humans but to its native inhabitants, the Hosts. The Host's cannot lie, Language doesn't allow them, and only a tiny number of the human inhabitants - mostly the doppelgangered Ambassadors - can speak Language. Avice shares something of a connection with the Hosts as she was invited, when much younger, to become a simile. To the hosts she is known as the girl who ate what was given her and as such she understands 'Language' or at least its construction. Then a new and different Ambassador, EzRa, arrives at Embassytown, one who's Language changes everything, sparking a war between the two species that threatens to annihilate them both. Amidst the impending catastrophe Avice Benner Cho knows that the only hope for humanity is for her to challenge everything both sides know - she must speak directly to the Hosts.

Embassytown, like most of Miéville's books, doesn't give you an easy ride. The language is dense, not written in the easiest or most fluid of styles and the book, particularly in the beginning, is riddled with terms and phrases that are plain to the characters but not to the reader. On top of that whole chunks of the pretty clunky dialogue are given over to complex and impenetrable exposition and while in some ways this stuff deigns to build a world around you, often it does nothing but jar you out of the story. Equally there is no-one you can really root for. Avice, the main character, is all well and good but she's not someone you'll fall in love with and like most of the folk that populate the book you only have a passing interest in whether she lives or dies.

But despite all of this I couldn't put Embassytown down, and it's because at the core of all of Miéville's work lie interesting ideas, ideas that you won't find anywhere else, and it's that challenge to your established mindset that puts him amongst the vanguard of writers of genre fiction.

The idea at the core of Embassytown is what it might be like to live in a world where there is no space in language, nothing between thought and deed, where the only utterance is that which is factual and therefore there can be no lies. But more than that, with no understanding save the absolute truth there can be no imagination in speech. No simile, no metaphor so no books or other literature. That is why the Hosts need people - only a select few mind - to become living similes. By making Avice a part of their language they create a foundation upon which to test Language, they make a statement True, because it actually happened, but that concept allows them to compare it to other things they know to be true. Things of course go wrong when the Hosts learn to lie. The lie-speech becomes like a drug, a craving that Hosts will do anything for and thus the corruption of Language precipitates the corruption of the species - someone much cleverer than me will give you the deep meaning behind that but for now, my mind is blown.

Embassytown tries hard to entertain, it's chock-full of bio-machines, the seeping, pulsing buildings, factories and even weapons we've come to expect from Miéville, the action tries to move along and the battle scenes are visceral and quite shocking so fans won't leave completely empty-handed but as a thriller, a race against time to save humanity, it doesn't really work for all the reasons already mentioned but more importantly, it commits the cardinal sin of any novel and that is, despite how clever the idea, it's often boring.

So on one level you have a not-very-good thriller and on the other a really smart, intelligent, thought-provoking idea that needs a place to be aired, I just wish there was a more compelling way to do it.

Embassytown is published by Pan Macmillan and is available with free delivery from The Book Depository and from Blackwell and other good book stores.

China Miéville has a blog.