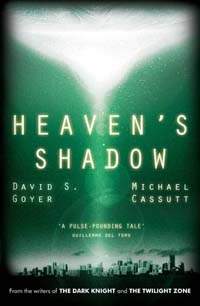 I've been looking forward to reading this for a while, largely because anything that comes from the pen of David S Goyer, the guy that wrote The Dark Knight, Batman Begins, the Blade movies, FlashForward, Dark City(amongst my favourite SF movies) and is working on the Superman re-boot, Man of Steel, is bound to get my attention, but couple that with a writer/producer whose pedigree in SF television includes The Outer Limits, Andromeda, The Dead Zone, Stargate SG1, The Twilight Zone, SeaQuest DSV, Eerie Indiana and Farscape just to mention a few, and things begin to get really interesting. But while these two defintely have the writing chops when it comes to the screen it's fair to say that they need work at writing novels - not a lot of work - but definitely some.

The book opens four hundred and forty thousand kilometres above the Earth as the spaceship Destiny-7 and its crew, further away from home than any other human beings in history, approach Near Earth Object Keanu, ready to land and start tests. The opportunity to get a close-up look at an NEO is so big that another craft, Brahma, funded via a Russian-Indian-Chinese Coalition is also approaching NEO Keanu ready to land so, even at this distance, no-one can escape the politics. But everything changes when, after landing, Keanu, on the same trajectory for thousands of years, suddenly changes direction, deliberately and under control, suggesting intelligent life at work. The new trajectory is Earth and what the two teams will discover when they start to look around will change all of their lives, and the lives of everyone on Earth, forever.

It has to be said that Heaven's Shadow reads not unlike a screenplay. The dialogue on the whole is short and snappy, the action light yet descriptive and precise and each chapter and section is headed by a supposed blog entry or forum message or SMS that reads like a slug line introducing the next piece. You can tell the background of these writers as you read, everything is very cinematic whether it's the bold brush strokes of the landscape, the view from space, the tension of landing or else it's in the tiny details of the spaceship interior, the way the crew interact, the crackle of speech from the communications as a constant reminder of the distance from home. All of this is good, very good, and in true screenplay style we learn about the characters as we go, from their actions, their behaviours rather than their thoughts. It's a lot of "show, don't tell" and it helps the pacing enormously.

Unfortunately what makes a good screenplay does not often work well for a novel. For example a single character and his point of view tries to carry practically the whole story and that's not necessarily a good thing, especially a character that's hard to like. The story beats, and to a certain extent the characters, are a tad formulaic, there's nothing tremendously new here and little-to-nothing in the way of a sub-plot to break it up and the secondary characters don't have enough depth, like they're only there to prod the main character along. It's as if - and I wouldn't mind betting on the truth of this - Heaven's Shadow started as a screenplay, or an idea for a screenplay at least, but was then changed to be a novel, but rather than changing the writing to reflect that, they padded out what they already had. The fact that it's already slated to made into a movie only reinforces that belief.

But I don't want to make it sound like it's a bad book, it's not, there's plenty of tense, gripping action, the sense of mystery as we discover what lies within Keanu is palpable and there are genuine shocks along the way, all of which make for a book that, at times, you just can't put down. But it is flawed. The lack of a decent sub-plot is a real irritation, not once during any of what takes place does any government, presidential or military presence really make itself felt and, given the enormity of what transpires and the fact that four of the worlds largest countries are involved, that's hard to believe. Additionally the characters do lack depth. We get a peek into their heads, some insight into the way they're thinking, but not enough to truly know them, so what we get a lot of the time is decision-making based on NASA protocol, logic rather than emotion, which makes it hard to care. My last gripe, and the one that actually makes me think there's a lot of padding here, is that we have 560-odd pages of book and only 300 pages of story. It would be so easy to see where the writers could remove 200 pages from the manuscript without losing anything from the plot overall and from two guys who should be used to 'writing lean' it's a puzzle as to why there is quite as much exposition as there is, and why so many things are explained twice. It's irritating as hell and, less forgiveable, it's boring.

But while the execution may leave a little to be desired, the central idea in Heaven's Shadow is terrific and bears exploring further. Despite it's flaws, Heaven's Shadow is a likeable book and does have it's strong points, the ending definitely being one them. It wasn't at all what I expected and as the first of a planned trilogy, the ending is good enough that, yes, I do want to read the next book and I do want to know what happens next, and really, that's what you want from any novel isn't it?

Heaven's Shadow is published by Tor through Pan Macmillan and is available with free delivery from The Book Depository and from Blackwell and all good book stores.