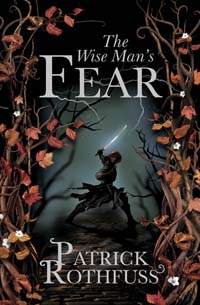 I loved 'The Name of the Wind', Patrick Rothfuss debut. I loved the characters, particularly Kvothe, the protagonist but I also loved the rich, beautifully drawn world and the myth and legend within, I loved the magic, the music and the setting but most of all I loved the writing, the lyrical prose, the depth and texture, the sheer poetry of the words that held me in thrall - and for a lot longer than most books - to the point where I was still thinking about it weeks and even months later. By any measure it was a triumph. So without hesitation I plonked my money down on the pre-order and, more than a couple of years and several of your Earth pounds later, the postman lugged it's gargantuan sequel, 'The Wise Man's Fear', up the path and dropped it - literally - onto my doorstep. My first reaction was a little whoop of joy, after all I'd been waiting for this a long time, then I suffered a little trepidation because it had been so long coming and that's not usually a good sign, but then fear hit me; would it be as good as the first? Could I live with that kind of disappointment? That fear held me back from reading it for a while but eventually the pull was so great that I hefted it open and started reading...

The story picks up exactly where it left off, Kvothe, under the assumed name of Kote, is running an inn with Bast, a friend and one of the Fae. Kvothe is hiding in plain sight though what from and why we are yet to discover. In the aftermath of an attack by a creature from the Mael that killed old man Shep, they both realise that things are about to change, and not for the better. Meanwhile Kote/Kvothe continues to dictate his memoir to the Chronicler so that his story may be told directly, rather than through hearsay and conjecture, myth and tall tales.

Kvothe's story carries on his time at the University finally bringing to a head is long-running feud with the nobleman, Ambrose. Following this incident, he is advised that the discrete thing to do would be to skip a term or two and travel a little, let things die down and put some time and distance between himself and the powers that be. Thus he pitches up the court of Maer Alveron of Vintas, recommended for a specific task by a mutual acquaintance, and looking to turn this into a possible patronage. After completing this task and steering a course through the complex political waters of the Maer's court, Kvothe is soon travelling along uncharted roads on a deadly quest to stay the hand of bandits that are stealing the Maer's taxes. Afterwards he spends some time with the warrior race, the Adem, learning their ways and their language, rescues some abductees from a life of slavery and returns to Vintas but, despite his successes, he falls foul of the Maer's new wife and is thus cast out of court and ends up back at the University albeit with the patronage he seeks and thus his academic life looks a lot rosier for the coming years than it did with the years past.

It's a measure of how good a writer is that while The Name of the Wind was as good a debut as I've ever read, The Wise Man's Fear is better in almost every way. It starts with character. While Kvothe has always been a fully rounded and complex central character, other characters in The Name of the Wind sometimes got short shrift. Now, Kvothe spends a not inconsiderable part of the first book on his own, and even when he gets to the university he takes his time to make friends and I gave some leeway because of it. However, in The Wise Man's Fear all of the characters are much more rounded and much more richly drawn, even the passing ones and it makes for much better reading. The world building too has improved. Rothfuss world-building has been accused of being lightweight but I've never subscribed to that point of view. Book one was about a small boy who's world view doesn't get much bigger than what he can immediately see so why would he know - and thus be able to impart - any details about the larger world of which he is a part. By the time of this book however, we have a young man who is indecently well-read, learned and smart and more confident in his abilities and thus we get more detail and more variety in everything he talks about. Even as he travels the country having 'adventures' for want of a better word we discover the world as he discovers it and for me that feels much more real than having a teenager who suddenly knows everything of the planet he lives on.

Which brings me to an important point in this book. At the beginning he is a boy. A teenage boy yes, a precocious and clever boy for sure, but for all that, still a boy. This book marks his passage toward becoming a man and it does that in the two most obvious ways for a fantasy novel: with violence as he defends himself against attack, both magical and non, as he fights for the Maer as he rescues folk and as he spends time with the Adem. He learns the value of life and the feeling of ending it and he knows how to make the right decision when it comes to the choice, but more importantly he makes a decision to be judge, jury and executioner in a way he never has before and that will colour his personality from now on I feel. He also, not to put too fine a point on it, gets laid...and how! A chance encounter in the woods with the fae goddess Felurian sees him divest himself of his virginity in no uncertain terms and when he finally takes his leave of her he carries himself in a much more assured manner and this too will effect his personality before long I am sure.

So to the flaws, or really, flaw. At 1000 pages it's a big ask, but it's so good that you'll not regret a minute of it even if you'll likely need the number of a good chiropractor after carrying it around for a week. Joking aside though it's too long and there is filler. Almost every scene starts earlier than it needs to and ends later than it should which is okay from time to time and in a novel not the worst crime you can commit but you could edit the book down by 150 pages and lose nothing of the story. The encounter with Felurian in particular is twice the page count it needs to be. Beyond the sex it does little to move the story forward and while it's nicely written it is a 'Tom Bombadil' moment as far as I'm concerned. As for the rest there are still big questions left unanswered. The mystery of the Chandrian remains largely untouched and although they are mentioned all the way through I didn't feel we were any closer to resolving it. The worry here being that it may all be wrapped up too quickly in book three, assuming it gets resolved at all. Also, Kvothe and Denna spend the pages dancing around each other again and I can't believe that any boy - let alone a teenager - would put up with her act for that long, although it may be that now he has some 'experience' under his belt (so to speak) he might get over himself in book three.

But I'm being churlish. There is so much here to enjoy that to say there is too much seems almost rude. Once again the language is gorgeous, rich and vibrant, descriptive without resorting to purple prose and occasionally sheer poetry - at some points literally - as he and Denna rhyme conversations with each other while they flirt and tease. The joy that Rothfuss must have experienced in the writing is obvious on every page and there are moments when Kvothe's words hit much deeper truths, about love, about life and about the search for meaning in both that demonstrate wisdom beyond his tender years.

So did it live up to my expectations? Most emphatically yes, and for fans of epic fantasy, it's an absolute must-read. In every way The Wise Man's Fear is another major triumph and Rothfuss has proved that he is without doubt one of the finest fantasy writers currently gracing the genre.

The Wise Man's Fear is published by Gollancz and is available with free delivery fromThe Book Depository or from Blackwell and other good book stores.