Memo from the Story Department 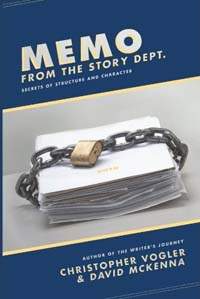 As anyone who has read it will attest, Christopher Vogler's The Writers Journey is pretty hard to beat, perennially in the all-time top 5 of screenwriting books whenever the votes are cast it was always going to be a tough act to follow. Memo from the Story Department: Secrets of Structure and Character, co-written by Vogler and long-time friend and collaborator David McKenna, had a lot to live up to then, so I'm happy to report that, as a companion work, does the job admirably.

Written in an easy going, very accessible style it starts out with the small, albeit important, stuff and works its way up to more complex lessons through each section. The presentation takes the form of alternating chapters from both authors, each covering a particular subject such as theme, the 'want' list, the contract with the audience, log line and synopsis and so on, with the other author chipping in with a comment or critique on the lesson at the end. It's a nice touch and works well making you feel like you're part of a conversation rather than sitting in on a lecture.

As you might expect from these two, as the explanations unfold the book covers a lot of ground, illustrating the points via old myths and legends, Russian fairy tales, vaudeville theatre, Greek comedies, even algebra and you also get the original seven page 'memo from the story department' that Vogler wrote while at Disney that kicked all this off. A large chunk of the book towards the end is taken up with McKenna's 'Six Environmental Factors' and personally I think they're worth the cover price alone but added together with the rest of what Vogler refers to as the 'storytelling toolkit', particularly Vogler's 'Twelve Stages Of Story' this book of practical tools and templates that you can just sit down and start to use on your next screenplay, will seem like a bargain.

The book ends with a couple of chapters of invaluable 'from the trenches' advice to launch your screenwriting career, no-nonsense practical stuff chock-full of checklists and advice that could have a massive impact on a fledgling career.

All in all Memo from the Story Department will not disappoint. Vogler and Mckenna are Zen Masters of storytelling and impart that knowledge to the rest of us with rare skill and enthusiasm. Make no mistake, 'Memo' is a must-have for anyone serious about story-telling.

Memo from the Story Department: Secrets of Structure and Character is published by Michael Wiese Books and is available with free delivery from The Book Depository or on the high street from Blackwell and all good book stores.

You can read a sample of the book at Scribd, and Christopher Vogler's blog is here.