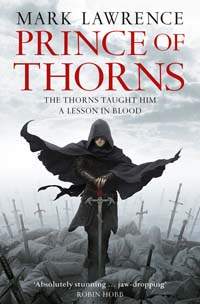 It's difficult not to open this review with the words "just go and bloody buy it!" because, in all honesty, as debuts go, Mark Lawrence's 'Prince of Thorns' is so good that whatever else I say is just going to be preamble to those exact words.

The eponymous Prince, Honorous Jorg Ancrath, having witnessed the brutal murder of a younger brother and rape and murder of a loving mother, forsakes the privilege of being a royal child and, a few years later, finds himself leader of a cut-throat gang of outlaws roaming up and down The Broken Empire raiding and looting where they see fit and leaving a trail of atrocities in their wake. With no single ruler to govern, and Jorg's gang always on the move, there is little to challenge them or bring them to justice and Jorg, possessed of an inate ability to control both the living and the dead, has carved himself a reputation for extreme violence with no mercy for anyone who questions him or stands in his way. Events conspire to bring Jorg face-to-face with his past and he decides, now that his father's new bride carries an heir, that the time is right to return home and lay claim to his birthright but, as he suspected, the homecoming is neither warm nor welcoming.

Told in the first person, Prince of Thorns had me gripped from the first page and even when I finished the last it wasn't done. It still has it's hooks in me and I can't wait for the next installment. But make no mistake, this isn't a heroic story. Jorg is bitter and cruel and cold and so utterly devoid of empathy for his fellow man - even his crew - that it's testament to Mark Lawrence skills as a writer that Jorg's sheer, unbridled charisma and force of personality have you rooting for him even when you know you shouldn't.

The book actually tells two stories in one, the main story of Jorg's return to his home kingdom and another of Jorg's short childhood, the tragedy that beset him and the path that led him to become what he is. The book switches readily between the two but it's fair to say that each is so interesting that the change never jars. The characters are nicely realised, Makin and Rike of The Botherhood, as Jorg calls his motley gang, represent the two sides of Jorg's personality, the good man, loyal and heroic, the man he might have been if he stayed home and the bloodthirsty villain he has become since he left. While the rest of the cast are not quite as fully rounded as these three they are still distinct, and a nice touch in that direction has each chapter prefaced by a single-line aside in which Jorg describes one of his crew, usually in less than flattering terms but at least grounding them in the story, and placing them on a hierarchy in relation to Jorg. Oh and Mark, if you're reading this, The Nuban is crying out for his own book...

The world-building in Prince of Thorns is also really interesting. On the surface it would appear that we are in some version of the standard faux-medieval Europe of most fantasy fare, but in several places during the book Jorg references works by Nietzsche, Plato, Sun Tzu, Shakespeare and more, he mentions the Romans who built the roads and calls on Jesu, Lord and Almighty before talking of the great battle that wiped out the nations. It all points to this world having evolved from something we know and - without giving the game away - there is confirmation of this strange setting in the latter stages of the book. It's an interesting twist with huge possibilities, especially as there are touches of 'magic' towards the very end of the story, so let's hope it plays out in some major way towards the end of the series.

The writing itself is excellent, the prose simple, straightforward and not too purple and the pacing and general flow of the thing is superb making for an easy, breezy read that you'll sail through pretty quickly. Finally I guess I have to mention the violence, if only because it is bloody, brutal, visceral and more often than not so casually inflicted that it comes as a bit of a shock, even to this hardened reader. There are one or two occasions when it comes across as gratuitous but overall it's essential to the story and reveals an awful lot about Jorg's character and his drive to unite the Broken Empire under his rule, no matter what, or who, it costs.

It's always difficult making comparisons, and I don't often do it, but with shades of Scott Lynch and Joe Abercombie in here, Mark Lawrence is up there with the best of them. There's so much to recommend here that I could go on all day, but really, just go and bloody buy it!

Prince of Thorns is published by Harper Voyager and is available with free delivery from The Book Depository and on the high street from Blackwell and all good book stores.