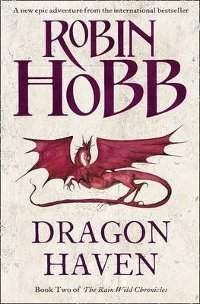 The first book in this series, The Dragon Keeper, finished quite abruptly, so it's no surpise that Dragon Haven, the second instalment in Robin Hobb's 'Rain Wild Chronicles' immediately throws us back into the middle of the ongoing saga. The young dragon keepers and the crew of the Liveship Tarman continue their dangerous and extensive search for the legendary dragon city of Kelsingra and the constant maintenance of the keepers starts to pay off with the dragons becoming stronger and more self sufficient as they start to recollect their previous power. The keepers meanwhile, start to slowly develop Rain Wild features. Despite struggling in her relationship with her dragon, Thymara enjoys her new-found freedom away from home and slowly grows into adulthood. She impresses the other keepers with her hunting skills and as her confidence grows she starts to understand that her physical defects won't prevent her from having a relationship or from having children and she develops strong role within the group. This strength makes her a desirable candidate for mating, and since women are a scarce commodity this raises tension amongst the men.

Bingtown wife and dragon scholar Alise, growing more independent, finds herself intensely attracted to Captain Leftrin of the Liveship Tarman which leads to her questioning the inevitability of her pre-ordained future, her loveless marriage and her obligation to her distant husband, Hest, while her childhood friend and assigned secretary, Sedric, comes to understand what his relationship with Alise's husband has really been about, revealing his true ambition for this journey and presenting him with a moral dilemma when destiny throws him in an unexpected direction. As for Leftrin, he sinks deeper in to the plan forced upon him by the Chalcedean trader, trying desperately to find an escape without exposing the hold the trader has on him, which is complicated further when suspicion of a traitor amid the ships crew emerges.

If it's been a while since you read The Dragon Keeper then you might want to keep it to hand while reading Dragon Haven since Hobb takes us straight in to the story with little-or-no concession to scene setting. In fact there's a sense that it was written as one book originally and then separated - albeit very successfully - into two novels. This means that book two has a much quicker tempo and a great deal more action than book one but it does work really well, creating a nice balance between the two halves. The viewpoint shifts continuously between the main characters revealing them in much more depth than before and Hobb gives us further insight into their lives as the story unfolds. Sedric's past struggle for success and his present yearning to escape is particularly compelling, making him much more three-dimensional than the previous book allowed. Hobb also brings some minor characters from the Dragon Keeper to the front and weaves together a number of interesting romances and good conflicts. The Chalcedean trader and his scheme is particularly intriguing, and even though in this book he is never far away from Leftrin, he remains a mystery and it would be nice to find out more about him in future books.

The pace is quite fast moving rapidly forward with several sub-plots unfolding simultaneously and Hobb fills the pages with so much action and so many thrills that, at times, there's almost too much happening at once. It's fair to say though, that where the dragons and their agenda figure into all of this is still unclear and they do feel like more of a supporting cast than a major plot point. Having said that, it does make me really curious about the third part of this series where we must discover more about them and their plans with Kelsingra.

Despite the fact that Hobbs' books are all loosely connected, this series can be read on its own since it provides enough background for new readers to connect with her world. Hobbs' ability to captivate her audience with an engaging world and rich characters makes it easy to start reading and not realise that you have spent hours engrossed in the story, and even though at times there's a lot going on, this is a great book that holds your attention from beginning to end.

Dragon Haven is published by Harper Voyager and is available with free delivery from The Book Depository, or on the high street from Blackwell and all good book stores.