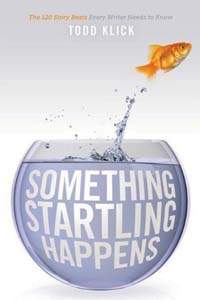 Another gem from Michael Wiese Publishing, albeit one that does demand a big suspension of disbelief when you read the premise. Todd Klick's 'Something Startling Happens' turns on the theory that there are 120 story beats that every writer must know, and that your screenplay has to hit each of these beats to be a success. This is a pretty bold claim by any measure, that if my screenplay hits each of these beats, minute-by-minute, then my writing will somehow become more saleable, but when you realise that your screenplay is only 96 pages long you can't help but say to yourself "Now hold on Todd, this just ain't gonna wash..." and it's a justifiable statement.

So here's the thing.

Mr. Klick says it doesn't matter. He says just follow the beats as described and when you stop writing it'll all work out in the end.

So I did that.

And here's the thing.

Yes, it really did. I went back to a five page short I wrote a few weeks ago and checked it against the first five beats of Todd's book:

And it actually hit them beat-for-beat which surprised the hell out of me but then I went and checked it against an 11 page short I wrote ages ago, and guess what:

They were all there, as he said they would be. I was, it has to be said, pretty shocked.

Now admittedly you can read into them in a few different ways, The Pursuit doesn't literally mean someone chasing someone else (although it can) it could also mean that our hero realises he must go after some goal, and so sets the wheels in motion, but that's the essence of any formula. It's not wholly prescriptive, you don't have to take these steps literally, they just allow you to follow some basic fundamentals that will make your story better.

And there's not much more to it than that. The book opens with Todd recounting the story of how he reached the revelation that spawned his book, then gives a little advice about how to use it whether you're a discovery writer or an avid outliner, then answers some frequently asked questions - including the obvious one about page-length - but the rest of the book is every one of the one hundred and twenty beats laid out in easily digestible form, with explanatory notes and examples from films of various genres to illustrate them. There are also a dozen easy exercises that involve watching, timing and studying several films, in order to properly grasp how one of the beats has been used, so that you can start to beat-out your own favourite films and see how well they adhere to Klick's teaching.

It's straightforward stuff with no frills but the writing is very engaging and, to his credit, Klick does include elements of more mainstream teachings in his chapters by using standard terms like hero, ally, ghost, conscience and so on to show how all of the things you already know about screenwriting dovetail into this way of working. There's also a quick reference glossary in the back and a filmography should you feel insane enough to go rent or buy every movie he mentions on the way.

So a bit of a strange one, but one that definitely works if you apply it retrospectively, so why not do yourself, and your writing a favour and start applying it from now on to the new stuff you're going to write.

Something Startling Happens is published by Michael Wiese Books and is available with free delivery from The Book Depository and in the high street from Blackwell and all good book stores.

You can download a sample chapter from Something Startling Happens over at Scribd, and you can read more from Todd Klick at Writer Wrench.