Chronicles of the Black Company 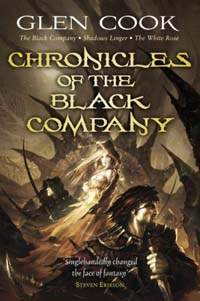 Every now and then I rummage through the giant TBR pile and come across something that I know I should have read but for some reason it just passed me by. Glen Cook's Chronicles of the Black Company, an omnibus of his first three Black Company novels, 'The Black Company', 'Shadows Linger' and 'The White Rose' is one such thing, and with a blurb from Steven Erikson on the cover stating that Cook "single-handedly changed the face of fantasy" I'm amazed it's taken me so long to get round to this terrific and utterly gripping series.

The Black Company are a band of mercenaries, last of the Free Companies of Khatovar and the last of the Twelve True Companies. Time was their number could be counted in the thousands, but time has seen that dwindle to a few hundred tired souls led by a dozen or so aging die-hards, those who have been enlisted so long the Black Company is in their souls, those with nowhere else to go, and there are precious few new recruits volunteering. We meet them cooling their heels in the service of the loathed ruler of a small coastal city but a change of circumstance sees them switch sides to ply their trade for The Lady, a powerful sorceress seeking to smash a rebellion that threatens her reign.

The books are narrated by Croaker, company Physician and Annalist, a middle-ranking soldier trusted by the brass and by grunts alike and what really sets them apart is that Croaker's story has gaps, not because he's particularly an unreliable narrator, but because he's not in charge. He doesn't know everything that's going on and he's not likely to be told either, which means we get chapter and verse of the stuff he knows and is involved in, and best guesses at what he doesn't so that the truth of some episodes goes unknown. He also doesn't write down everything that goes on. The Black Company are a band of mercenaries, vicious, brutish and violent and he sees no profit in recalling every grisly detail of their deeds, but similarly, like any band of brothers living and fighting together for extended periods, they josh and argue, exchange banter and play pranks on each other to let off steam and it's this sweep from one extreme to the other embues the books with real authenticity.

The cast of is as good as you'll find anywhere, Croaker being joined by One-Eye, Silent, Elmo, Goblin, Raven and many more, each beautifully drawn, well-rounded and fully fleshed out characters that you'll grow to love, warts and all. It's worth noting that Cook's own life includes time in the military during the Vietnam war and it's not hard to see how that influences the way his characters talk to each other and how they behave, they are professional soldiers before, during and after battle.

To begin with the writing isn't exactly poetry, wavering as it does between flowery and almost factual, but it does improve from book to book as Cook finds his voice. The tone leans towards gritty but is rather more matter of fact than that, although it suits the no-frills portrait that Cook paints of the lives of these men, especially given the abscence of a large number of the usual tropes you expect to see in this kind of (un)heroic fantasy and the propensity they have for large amounts of violence. The pacing too is a little uneven at first but given that the life of a soldier is one of enormous periods of quiet followed by short burst of frenetic fighting it does match the mood of battle.

Overall though the three books will reward the reader with a fascinating and beguiling tale of men at war, internally and externally. They are mismatched friends and bitter enemies both and, truth be told, Cook pulls you right inside the story from the get-go and I couldn't put them down once I'd started reading. It's hard to say whether they truly "changed the face of fantasy" but it's not hard when reading the likes of Abercrombie, Redick, Lynch, Sykes and many others to see how he might well have had some influence.

Chronicles of the Black Company is published by Gollancz and is available with free delivery from The Book Depository and on the high street from Blackwell and all good book stores.