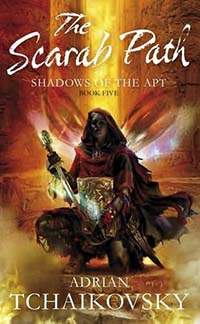 I hope you’ve all been keeping up with the Great Tchaikovsky re-read with yours truly over at the Tor Books blog.

Right now we’ve gotten as far as book 5, The Scarab Path, but it’s never too late to catch up, and this fabulous series is one you really have to read. For the uninitiated, here’s the overview.

In this epic fantasy series of war and empire the city states of the Lowlands have lived in peace for decades, bastions of civilisation, prosperity and sophistication. They have been protected by treaties, trade and a belief in the reasonable nature of their neighbours.

But meanwhile, in far-off corners, the Wasp Empire has been devouring city after city with its highly trained armies, its machines, its killing Art, and now its hunger for conquest and war has become insatiable.

Only the ageing Stenwold Maker, spymaster, artificer and statesman, can see that the long days of peace are over. It falls upon his shoulders to open the eyes of his people before a black-and-gold tide sweeps down over the Lowlands burning away everything in its path.

But first he must stop himself from becoming the Empire’s latest victim.

Get started on this epic fantasy series right now, you’ll be glad you did.