Metawars 1: Fight For The Future 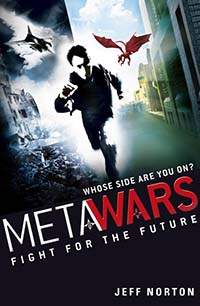 The real world has fallen to rack and ruin, the oil has run out and over-population and global warming has decimated our ability to travel, to get work, just to feed ourselves. In the midst of this a new world, a virtual world called the Metasphere, has become the place where people spend most of their day-to-day lives; education, entertainment, shopping, just hanging-out all takes place in a virtual utopia where everyone is represented by an avatar, a sub-conscious projection of themselves. But two warring factions are locked in a brutal battle for control of the Metasphere. The Millenials, led by the despotic Matthew Granger, its creator, believe that he should control this virtual world alone so that it doesn’t fall into chaos and end up destroyed like the real world. The Guardians, on the other hand, a rag-tag group of self-styled revolutionaries believe that the Metasphere should be free, that no single person should wield so much power that they effectively control the lives of everyone in it.

Jonah Delacroix hates the real world, and even when he’s not at school he lives most of his life plugged-in. Jonah has always known which side he’s on, after all The Guardians killed his father, so he now lives with his mother on a converted bus desperately trying to make ends meet. One day, while in the Metasphere, he finds his father’s hidden avatar and it contains a cryptic message for him. In order to access the message, he filters the avatar, subsuming it as his own, but now that his father is assumed to be alive the consequences prove deadly, and Jonah finds himself catapulted into the middle of the fight between the Millenials and the Guardians. Only now, things aren’t as black and white as he once believed, and Jonah must find his own truth as the battle wages in both worlds.

The basic premise of Metawars won’t get the hardened science fiction fans very excited. The idea of a virtual world where people jack-in to live their lives is as old and hackneyed an SF trope as you’ll find, and looking my TBR pile I can see at least three or four other books that tread this same ground. But credit where credit is due, Jeff Norton takes this basic premise and manages to breathe a little extra magic into it, elevating it above other similar fare into a fast and fun read.

Key to this are the characters, particularly our erstwhile hero Jonah who is angsty but never veers to much towards the sulks, while the small group that saves his life and ultimately he ends up fighting alongside are all well drawn and nicely rounded out. In particular the adults came across well as young adult novels tend to paint grown-ups as clueless and a hindrance to the main character whereas Metawars makes them a central part of the story.

While the plot centres around the virtual world, the action mostly takes place in the real world and features aerial dogfights, gun battles and car chases making the threat to the characters feel much more real than whether they might get killed in the Metasphere which, frankly, I never buy as a way to get killed IRL. Cleverly this means that key to this ongoing war is control over actual hardware, meaning the vast server farms that hold the data that runs the Metasphere itself, this kind of real-world thinking is all to rare in science fiction so hats off to Norton for going there.

There are other nice touches too. I liked the Island of the Uploaded, a place segregated within the Metasphere, where people who are about to die can upload themselves and live on as pure avatars. This allows their loved ones to visit them forever more, but as a suicide, they have no rights beyond their stay on the island. I also liked that no-one gets to choose their avatar, it is a manifestation of your own inner self and, as such, says a lot about the person behind it.

All in all Metawars 1: Fight For The Future is a fast, furious and fun-packed read, the kind of book that gets youngsters raised on a diet of social networking, video games, satellite TV and the internet interested in reading again, and for that Jeff Norton should be greatly encouraged. It’s not without it’s faults, and it would be easy to sit and pick at them, but I’ve read a lot worse by more vaunted authors, and besides, the eleven year old boy in you will love it!

Metawars 1: Fight For The Future is published by Orchard Books and is available online with free delivery from The Book Depository or on the high street from Blackwell and all good book stores.