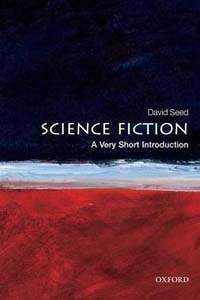 Science fiction writers have always occupied this extraordinarily fertile space between the conventional literary genres. It frees them to eschew the practical constraints of this world and invent fabulous new worlds through ideas like interplanetary colonisation, post-apocalyptic landscapes, alternate histories or time travel, and use these stories to use allegory to explore the big "what if..?" questions about humanity. Until recently these ideas remained stuck in the sci-fi ghetto, but not anymore. The persistent themes of science fiction and the tropes used to illustrate them are now very much in the mainstream - science fiction is trendy - and readers are realising that the 'genre of ideas' is both rich and deep.

This is what David Seed's Very Short Introduction to Science Fiction sets out to show, that science fiction is not just a single genre, it is a place where different genres, from romance to historical literature, from space opera to cyberpunk, collide in the most engaged, socially relevant, and responsive way to the modern technological environment. This is not a history of science fiction, rather it's an attempt to tie examples of the genre to different historical moments and demonstrate how science fiction has evolved, especially since its emergence as a popular genre in the 20th century, and to consider the wider social and political issues raised by science fiction writers, exploring science fiction as a global phenomenon that constantly evolves and changes in times of rapid technological and political change.

Seed doesn't just cover books either, along the way he also takes in drama, poetry and film and compares the different media, examining recurrent themes such as space travel, the concept of the alien and alternative social identities, the ways in which changes in science and technology affect human perception and behaviour and the role of technology in science fiction, and its relation to time - past, present, and future.

Although a little dry in places (Seed is after all an academic) it's nevertheless an accessible and engaging read, with a surprising amount of detail for a small book, but for anyone interested in learning more about the genre by hitting the big milestones, it comes highly recommended.

Oxford University Press's Very Short Introductions combine authority with wit, accessibility, and style and offer straightforward introductions to some of life's most interesting topics. Written by experts but with the newcomer in mind, they demonstrate the finest contemporary thinking about the central problems and issues in hundreds of key topics, from philosophy to Freud, quantum theory to Islam.

or on the high street from Blackwell and all good book stores.