C J Cherryh’s Foreigner series to be a Movie in Audio.

Adapting the first book will be author, Sable Jak, a long-time fan of Cherryh's and the person who pulled the principles together. Jak, who has won awards in the audio drama field, will also direct the estimated six-hour production. SCI-FI-LONDON regulars will no-doubt remember Sable from our Genre Film Campus and the excellent workshop she held on Writing The Fantasy Film, based on her best-selling book of the same name published by MWP.

I caught up with Sable briefly to get some more details on this exciting project:

SFL: Hi Sable, you must be very excited about the project?

SJ: "Absolutely! First of all, this is my favorite series of books, but also, CJ Cherryh is one of my favorite writers, so to be working with her on this project is like... well, it's better than chocolate AND a date with Antonio Banderas!."

SFL: So I'm curious, what exactly is a Movie in Audio?

SJ: "The talking book or book on tape is just that, one guy just reading the book to you. This is, essentially, audio drama, but not like those old radio plays with a bit of dialogue and some footsteps and then someone banging two coconuts together for a horse, this is a full soundscape, with atmospherics and state-of-art sound effects, rich dialogue taken directly from the novels, and a completely original music score."

"In the U.S. audio drama isn't as popular as it still is in the UK. Here, the vast majority of the people still think of it like old time radio. In order to combat that we went through a list of name ideas before arriving at Movie in Audio. We want people to think of it as putting in the earbuds and being so totally immersed in the action that they practically experience it themselves."

"With books you create pictures in your mind, with movies you see pictures with your eyes, but both mediums can keep you at arms-length from the world of the story. Sound though... sound can help you really experience it."

SJ: "It is! And this is one heck of an undertaking. All of CJ's dialog is in there. We are not just remaining true to the story, we are presenting the story pretty much in toto. But, we are NOT doing any narration. None of this disembodied voice saying: Bren ran up the stairs and turned left on the landing, only to come to a stop when he saw.... etc. etc. All the action will be conveyed by sound and music."

"The characters inner thoughts are also done in dialog, in fact a fair amount of description can be handled with dialog and a good actor, and believe me, the three actors that we have cast so far are perfect!"

SFL: So how much input has CJ Cherryh had in things?

SJ: "Two words: A Lot! The script will only be done when CJ's satisfied with it. I'm the one doing the adapting (and creating the dialog for the inner thoughts and scenic scenes) and I can tell you it's pressure enough doing the work, but I also have to make sure to capture CJ's voice in an authentic way, but so far she's pleased with what I've done." 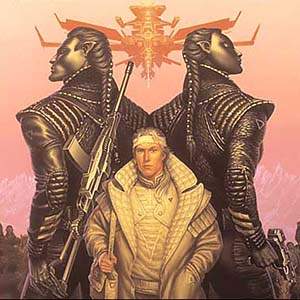 At the helm of this state-of-the-art audio project will be veteran audio producer and sound designer, Tim Knofler.

Three of the actors who participated in the demo that ACE initially presented to Cherryh were given the nod to play the roles in the full production by Cherryh herself.

Cast as the only human in the story, Bren Cameron, is horror artist and voice actor Wednesday Wolf. Helen Hayes award winning actress Gin Hammond will bring the role of the Assassin's Guild bodyguard Jago to life, and the actress/singer Jane Cater will provide the pivotal role of Ilisidi. A fourth main character is yet to be cast.

The projected budget for the production is in excess of $250,000. A funding campaign will be launched within a few weeks on Crowdfunding site Kickstarter and we'll bring you details when we have them.

A number of other elements are yet to be finalised, including recording location and the remaining cast members, but production dates are projected for early 2013.

C J Cherryh herself told SFL "I'm delighted to be an active part of this project. We've had close consultation getting this going, and I hope my readers will be as happy with this creation as I am."

Updates will be posted at the CJ Cherryh Movie in Audio blog at cjcherryhmovieinaudio.tumblr.com and through Audio Cinema Entertainment, Inc at www.audiocei.com.