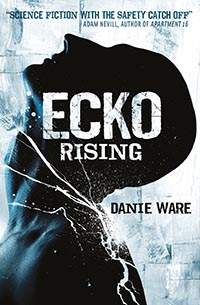 Ecko Rising is the debut novel from Danie Ware who, for those who don’t know, is the publicist and event organiser at Forbidden Planet. It's a unique genre-bending fantasy/sci-fi epic that follows the ruthless, cybernetically enhanced terrorist/assassin/rebel and gleefully cynical anti-hero, Ecko, after a job goes wrong and he wakes up with a misfit cast of characters in a dimension-jumping inn, as part of a medieval fantasy world where he must face and conquer his deepest fears and save the world from extinction.

SCI-FI-LONDON caught up with Danie during her "blog tour" to talk about her new novel:

SFL: Tell us about Ecko Rising!
DW:Ecko Rising is sardonic fantasy, a sharp new slant on the genre, dusted with a scattering of sex, violence and sarcasm. It’s a new look at an old favourite!

SFL: You’re the publicist and event organiser at Forbidden Planet so you’ve spent a long time surrounded by sci-fi and fantasy books, comics and memorabilia. What prompted you to start writing? Was it something you always wanted to do or did you look around you at the office and think "I can do that!"?
DW:I’ve been writing since I was at Uni - fun stuff, off the cuff stuff, shared words - and worlds - with creative friends. In our twenties, we simply made it up because we could; we imagined and crafted it and then built on it. In my thirties, I stopped writing completely - it took going to EasterCon in 2008, and being back in a creative community, to start it all again.

SFL: What was your starting point with the book, was it mixing the SF/F genres, was it building that world or was it Ecko himself?
DW:None of the above! It was only playing with concepts, speculative fiction in its purest form - just a 'what if' story. As I remember, the first thing I actually wrote down was a description of the Banned - the bikers-on-horseback thing was a lot of fun, and not something I’d ever seen the genre do!

SFL: Ecko is a pretty straight-ahead anti-hero on the surface but underneath there are layers of complexity that only start to reveal themselves towards the end of the book, what was he like to write?
DW:A lot of fun, mostly - and occasionally hard to control! Being able to break down the barriers and look at well-known fantasy archetypes though new and sharp and cynical eyes was kind of liberating!

SFL: They say that all writing is in some way autobiographical, are you as angry as Ecko? Do some of his thoughts 'echo' your own?
DW:Certainly, when I was angry he was a lot easier to write! When I wasn’t - that’s where the music kicks in. A big ol' mug of coffee and a healthy dose of Infected Mushroom or The Prodigy, and he would come back to the surface. Adrenaline can have the same effect - sometimes, when writing fight scenes, or confrontations, I’d be on my feet running though the manoeuvres... good thing no-one saw me, really!

SFL: Despite having to have a talent for writing I expect having strong inroads into the publishing world helped in some way, so I suppose the obvious question is how did you get from book idea to published novel?
DW:A lot of time and hard work, and the help of my friends. In my twenties, I made several attempts to get my work published and failed. When I started writing again, I put the first few chapters on Google Pages and a friend was kind enough to offer to show them to his publisher. It all snowballed from there, but, as always with these things, there has been a lot of hard work and patience involved!

SFL: You blend the sci-fi and fantasy genres together by transplanting a high-tech character from one world into a fantasy story from another, Mark Twain style. It’s a big ask to get that right in a debut so I’m intrigued about the thinking behind that decision and how hard it was to pull off?
DW:I don’t think I even thought about it! I liked 'culture shock' SF/F fiction was I was younger - Stephen Donaldson, and Julian May’s 'Saga of the Exiles' - and it was just the next logical step. It’s a fascinating concept and I think I just wanted to explore it fully.

SFL: How has your day job affected you being an author? How have the folks you know from the SF/F community reacted and was it daunting putting your work out there?
DW:Was - and is! Last night at the signing, standing where so many of today’s accomplished authors have stood, was a pretty scary thing. Everybody has been incredibly supportive and encouraging, though; it’s a very welcoming community - at the end of the day, we all love the same things, and work towards the same ends.

SFL: I presume you have a really good idea of how your book should be marketed and sold, have you had much of a say or are you happy to let Titan do their thing?
DW:Chris and Sophie have been fantastic, and I’ve tried not to be too big a pain in the rear! I’ve had lots of ideas and suggestions, certainly, and we’ve talked them through - and sometimes they’ve been taken up and sometimes they haven’t. Titan have done an absolutely storming job!

SFL: I know from my own experience that holding down a demanding day job and finding time to write is hard to do. How have you found juggling the two things?
DW:Three things - I’m also a single parent! It isn’t easy, as everyone knows, trying to spin so many plates and keep all of them from falling. I’ve tried to master the art of snap-writing, being able to jump into, and out of, writing mode whenever I’ve had a free moment, writing when and wherever I can, or getting up at stupid o’clock in the morning, before my son is awake, and writing my allocation before the day begins.

SFL: Are you a disciplined writer or do you have to force yourself to sit down and write? And where and when do you usually write?
DW:As per the answer above - as and when and where I can. Yes, I’m extremely disciplined, but very its very nature, that discipline is oddly haphazard - it has to be! On those wonderful and rare days when I actually get whole hours of time to write, I turn the server off and catch myself up. It’s a bit hectic, but it’s the best I can do for the moment.

SFL: What is your writing process? Do you read over the last bit of work and then start from there, do you constantly edit as you go or do stop when you know what’s going to happen next so you can get started easily the next day?
DW:Yes to the last question - I always try and leave myself an 'in'. When I do get a chunk of time to write, I go through and edit the snap-writing, make sure the structure is where it should be and then forge ahead. I tend to 'write aloud', as well - helps me focus and keeps the characters distinctive and strong.

SFL: Are you an outliner that meticulously plans everything or are you a 'discovery writer' in other words, someone who can just wing it?
DW:You have to have a structure – before I start writing, I break that structure down into individual characters/story arcs and then into individual chapters, usually starting with the end. Having said that, though, no plot is infallible and there are times a character goes off the rails, or a storyline just doesn’t work as you thought it would, and then you have to go back and rethink it.

SFL: What was your SF/F gateway drug and how has that changed over the years? What kinds of things influence you now?
DW:As a small cub, I loved mythology - Greek and Viking, and then Mayan and Incan and Chinese. At 14, my first-ever serious boyfriend lent me 'The Illearth War' - and that was me addicted. I read fantasy for years, then moved on into cyberpunk SF, Gibson and Stephenson. In my thirties, I stopped reading genre almost completely and read a lot of Chuck Palahniuk and Bret Easton Ellis. I’ve come back to fantasy recently, and am very much enjoying the harder, grittier edge bought to the genre by Joe Abercrombie and Richard Morgan. I’ve also always been a reader of historical military fiction, particularly classical.

SFL: What next for Danie Ware? I’m guessing there has to be a follow up to Ecko Rising, but beyond that?
DW:Ecko II has been handed in, and I have an urban fantasy novel sat on the desk of my agent. More than that, we shall have to see!

Many thanks to Danie for her time, Ecko Rising is out 21st September and we'll post a full review on SFL very soon.