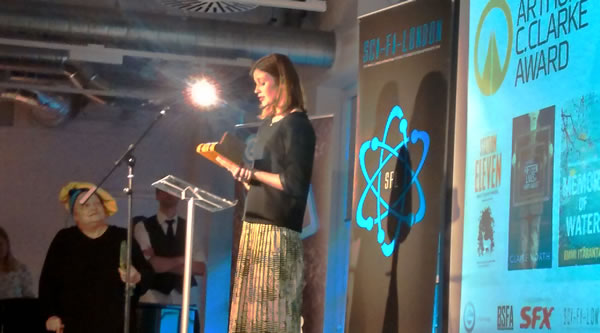 At a wonderful ceremony at the new flagship Foyles Bookshop on Charing Cross Road, London, the great and the good in SF literature were gathered together for the announcement of the 2014 winner.

A few glasses of wine, some good speeches and finally, two time winner of the Clarke, Pat Cadigan, opened the envelope... not before grabbing a selfie with the audience!

So, the six shortlisted books for the Arthur C. Clarke Award for best science fiction novel of the year published in 2014 are:

And the winner is Station Eleven - Emily St John Mandel

The 6 shortlisted titles were selected from a list of 107 individual eligible submissions, put forward by 36 different publishing houses and imprints.

“This is a quintessentially Clarke Award kind of a shortlist of exactly the sort that we've become known for over the years and always love to celebrate. Congratulations to all of our shortlisted authors, their publishing teams and, of course, a big thank you to everyone on our judging panel this year.

“We've got six authors who have never been nominated for the Clarke Award before and while the subject matter may often be dark, when we think about what this list says about the strength of science fiction literature itself, I see a future that's full of confidence, creativity and diversity of imagination.”

Addressing recent issues around diversity and the overt politicising of genre awards, he added:

“Diversity in science fiction is the big topic right now, and rightly so, and the Clarke Award is as much a part of that conversation as any other award.  Diversity for us means starting with as broad a range of voices and books as possible so we can pick a shortlist that we think really is the best of science fiction literature.

Awards should stimulate debate. Their choices should provoke a response, and that often means strong debate will be generated as a result, but an award actively seeking controversy is really missing the point and that goes double for any group seeking to artificially create controversy around an award for its own ends. In other words, it's not a battle of competing ideologies - left versus right - it's a simpler matter of constructive versus destructive attitudes."

“A good shortlist isn't a statement about what you should like, it's an invitation to go beyond the limits of what you already know so you can experience and enjoy something new. Why limit an appreciation of a literature that's built on the power of human imagination?”

The judging panel for the Arthur C. Clarke Award 2015 are:

Andrew M. Butler represents the Arthur C. Clarke Award in a non-voting role as the Chair of the Judges.

The winner will be presented with a cheque for £2015.00 and the award itself, a commemorative engraved bookend.

The annual award is presented for the best science fiction novel of the year, and selected from a list of novels whose UK first edition was published in the previous calendar year.

The award was originally established by a generous grant from Sir Arthur C. Clarke with the aim of promoting science fiction in Britain, and is currently administered by the Serendip Foundation, a voluntary organisation created to oversee the on-going running and development of the award.

Members of the judging panel are nominated by supporting organisations, currently the British Science Fiction Association, the Science Fiction Foundation and the SCI-FI-LONDON film festival.