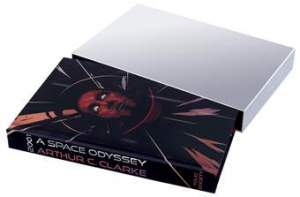 The Folio Society have been busy again and just released this beautiful new version of the classic Arthur C Clarke science fiction masterwork, 2001: A Space Odyssey. This, unbelievably, is the first ever illustrated edition of the novel, and includes seven stunning illustrations by Joe Wilson that capture the book’s vision of 2001’s remarkable future. Alongside them, a new introduction by Clarke’s long-standing colleague Michael Moorcock, reveals much of his friend’s personality, as well as casting new light on the fractious relationship between Clarke and Kubrick. This sumptuous new edition also includes the the foreword written jointly by Clarke and Kubrick, as well as Clarke’s ‘Back to 2001’ preface, written in 1989.

Developed from an Arthur C. Clarke short story ‘The Sentinel’ and brainstormed together with legendary film director Stanley Kubrick, 2001: A Space Odyssey has had an indelible impact on both cinema and genre literature. Written alongside the screenplay, the book stands on its own merits as a visionary work: a powerful exploration of space, artificial intelligence and the destiny of humanity.

Clarke was an enthusiastic evangelist for space exploration and chairman of the British Interplanetary Society, and his detailed depiction of space travel was nothing less than visionary, yet Clarke writes with an optimism that makes his future feel inevitable. Even now 2001: A Space Odyssey is an compelling and very entertaining read as Clarke moves us swiftly from the appearance of the first monolith on prehistoric earth to a chilling episode on board the Discovery, when a mission to Saturn is jeopardised by the increasing mental instability of the ship’s computer, HAL 9000. The final section of the book, in which the isolated David Bowman explores this ‘Grand Central Station of the Galaxy’, is a frightening, extraordinary and undoubtedly joyful trip to the very limits of human experience.

A handsome addition to any SF library, this Folio Society edition is bound in paper, printed and blocked in holographic foil with a design by the artist and set in Cartier Book with Univers display. It totals 240 pages with 6 full-page colour illustrations plus a double page spread and comes presented in a 9” x 6” metallic slipcase. 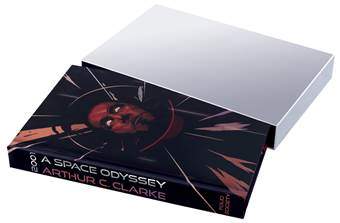