The Folio Society Edition of Isaac Asimov’s I, Robot 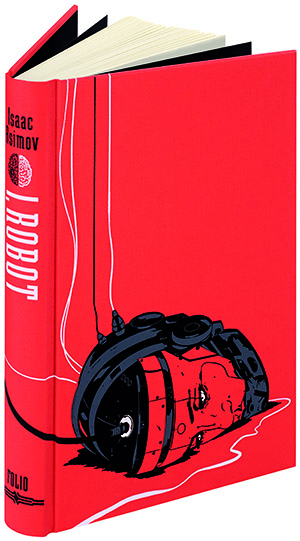 Isaac Asimov, winner of the Hugo Award four times and the Nebula Award, was more than one of the greatest science-fiction writers of his age. In his introduction to this Folio Society edition, robotics engineer and author Daniel H. Wilson describes how Asimov’s fictional vision of the future - and particularly his ‘Three Laws of Robotics’ - would have a significant impact on the development of real-world technology. Asimov’s gift, Wilson writes, was to ‘lift our eyes to the horizon; to show us worlds worth living in’.

Via the reminiscences of Chief Robopsychologist Dr Susan Calvin, I, Robot offers the reader snapshots of a future fraught with remarkable technologies and unthought-of moral conundrums. In ‘Robbie’, a little girl grows so attached to her robot nanny that she is inconsolable when her parents try to replace him; field engineers Powell and Donovan must deal with the religious mania of a robot that refuses to believe that human beings – creatures so ‘soft and flabby’ and ‘makeshift’ - could be responsible for its creation; and in ‘Liar!’ a telepathic robot lies to its human colleagues to save their feelings, with terrible consequences. In each story, Asimov reveals a new facet of this complex future and the unexpected consequences of the ubiquitous Three Laws, ultimately sowing the seeds for his acclaimed Foundation series.

This edition is illustrated by Alex Wells who created six illustrations and a frontispiece as well as the dramatic, bold red, binding design. His vibrant images perfectly capture the fundamentally uneasy relationship between a burgeoning artificial intelligence and its creator. SCI-FI-LONDON was lucky enough to catch up with him briefly to talk about the work on this wonderful book.

SFL. What drew you to the project?
AW. I had worked with Folio Society before a number of years earlier for one of my first ever commissions; they were a dream to work with so when I was approached again I jumped at the chance.

SFL. Had you read the book before or was it a new for you?
AW. The author Asimov wasn’t new to me but I had never read I,Robot before.

SFL. What was it that resonated for you and how did that inform the illustrations?
AW. The book serves to examine the evolution of Artificial Intelligence in such a unique and interesting way that wasn’t the usual ‘rise against humanity’ storyline. It helped me think of the illustrations in another way outside of the typical SF treatment.

SFL. With stories as rich as I, Robot, how did you go about choosing which parts to illustrate?
AW. I needed to be able to split the illustrations up evenly throughout the book and luckily for me it’s already comprised of several short stories.

SFL. Your style is very colourful and very vibrant, a refreshing change actually, but was it difficult to get that to mesh with a sci-fi world where things are typically drawn in muted greys and blues?
AW. I was quite conscious before starting that I didn't want it to look muted. I think it's a turn off for people who don't normally read the genre and when I read through the book I didn't particularly feel that those palettes suited the stories being told anyway.

SFL. Obviously I Robot has been a very successful blockbuster movie seen by millions, how do you make sure that your own work remains distinct from something like that?
AW. It wasn't hard to differentiate the two. The film is a very different entity to the book completely, story and all. They share similar overarching themes but I was really surprised at just how different they are.

SFL. Were there any unique challenges to this project or to working for the Folio Society, things you hadn't had to consider before?
AW. Without sounding too biased Folio Society were very accommodating and they really let you explore the book for yourself and approach it in the way you want to.

SFL. There's only a handful of selected illustrations in the finished book, but were there any that didn't make it in, or any treatments that weren't working that you gave up on? Was there anything you would have liked to have drawn but didn't get the chance?
AW. I had a few scenes I really liked but due to spacing issues I couldn't get away with doing. I especially liked a scene where two characters, Powell and Donovan, experience hyperspace for the first time. During the process you effectively cease to exist and it's described in the book in great detail. I'm tempted to an illustration for that scene separately!

SFL. I Robot is a well-known and loved work by a hugely influential writer, where do you start when taking on a project like this, and how long, typically, does it take from inception to completion?
AW. I started by reading the book! My part of the process goes over a couple of months from start to finish so it can seem a bit frantic at times but it was fun to work on the entire time.

SFL. What's next for Alex Wells? Any exhibitions, books or other projects that SCI-FI-LONDON readers might like to know about?
AW. No more books on the horizon just yet (looks over at Folio Society!) but I'm very busy on editorial work currently. I have been working on an idea for my own book for a while now which is sci-fi based so I'm determined that 2017 is the year I get that project off the ground!

SFL. Good luck with and thanks for speaking with us
AW. Pleasure! 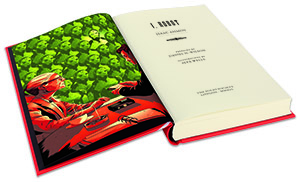 The Folio Society edition of I, Robot is bound in a bold red cloth, blocked with a design by the Alex Wells. It is 256 pages, set in Garamond Pro with a frontispiece and six colour illustrations. It measures 9”x5¾” and comes in a plain slipcase. 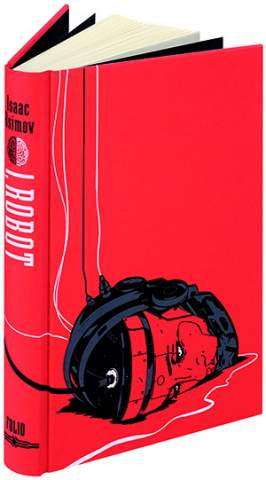 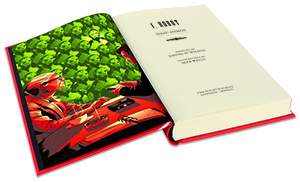