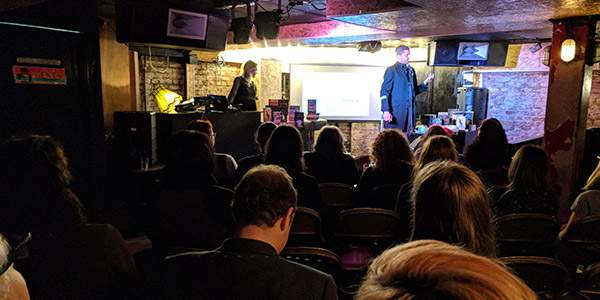 The Kitschies, the prize for 'novels containing elements of the speculative and fantastic' have announced for the most 'progressive, intelligent and entertaining' books of 2017.

“A Rift within a family, between sisters, between realities, memories and worlds. Nina Allan’s novel is beautifully written, emotionally messy, ambiguous and sly. It’s smart, subtle, technically inventive. Speculative fiction at its best. The shortlist was astonishingly strong but the vote for this was unanimous.”

Hunger Makes The Wolf, by Alex Wells (Angry Robot) won the Golden Tentacle for Debut, receiving £500 and a hand-crafted tentacle trophy. The prize was introduced by judge Alasdair Stuart.

“While the backdrop may be arid and dusty, Alex Ack’s debut is lush with ideas, characters and invention. A story of chosen families, the different battlefields we choose and that are chosen for us and what it means to be more or less than human, Hunger Makes The Wolf does the near impossible; takes a sub genre that was looking largely played out and uses it as the foundation stone for something new, rich and strange.”

“It was a tough decision between the last five books, but the History of bees encapsulated all the criteria: the colour scheme, the spine, the honeycomb design that extended to the barcode on the back  is well thought out and cleverly executed and perfectly in keeping with the book itself.”

This year's winners were selected from 137 submissions, received from over 50 imprints.

"Seven years of giving out tentacles has taught us that there are publishers, big and small, taking risks and bringing out amazing books that aren’t afraid to blow your expectations of what speculative fiction can do to your mind."

This year's Kitschies were sponsored by Blackwells, the largest academic and specialist bookseller in the UK, and all of the books on the shortlist can be bought on their website.