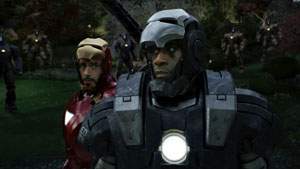 I would like to say that this IRON MAN sequel is a stark contrast to the first one, but not only is it a rather bad pun, although not at the nadir of The Sun, but also it is not true. In fact, it is more of the same. Surprisingly this has caused a fair amount of mumbling amongst the audience at the press screening.

Saying it is more of the same could be perceived as a negative, but with the original one being one of the most entertaining comic book adaptations, at least until KICK ASS came along, that is far from being derisive. 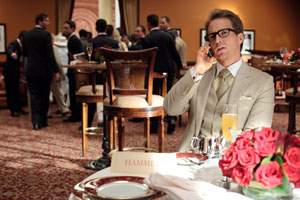 First of all the positives: Robert Downey Jr. He reprises his role of Stark with all the charm and arrogance of the original. His moment of self-doubt has well and truly gone (apart from the whole "I'm dying" thing) from the spectacular opening scene entrance to his courtroom verbal jousting (with Gary Shandling's Seantor Stern), he is in fine form. And his verbal sparring with Pepper bears the same dynamics as Tracey and Hepburn.

The there's the rest of the cast. For a popcorn comic book adaptation it has fantastic indie credentials that you don't usually see in a Marvel movie, and I'm talking about some of the finest contemporary actors. In the first movie there was the now Oscar-winning Jeff Bridges (Flynn Lives).

In this new chapter there is Sam Rockwell, whose bravura performance in MOON made it the success it was, playing Justin Hammer, head of a rival weapons manufacturer. He gives the character just the right amount eccentricity and megalomania, along with some of the dance moves from CONFESSIONS OF A DANGEROUS MIND. 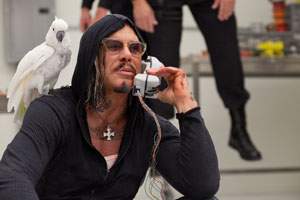 Then there is the multi-award-winning Mickey Rourke (still with hair extensions) as Ivan Vanko aka Whiplash, Iron Man's nemesis in this movie. Given Rourke's penchant for theatrics he plays this remarkably understated, although he is a brooding contrast to Rockwell's Hammer, whom he teams up with for a while. Sam Jackson (the coolest man on the planet, although Johnny Depp must be a contender) makes a significant appearance as Nick Fury, setting up for The Avengers, which Joss whedon is strongly rumoured to up for as writer-director.

Don Cheadle takes over from Terrence Howard as Rhodey, and thankfully doesn't have to do a mockney accent. He also gets to put on the suit and joins Iron Man as War Machine for the climactic battle, which is far better than the one at the end of the first movie. Also in the cast is Scarlett Johansson who not only flaunts her ass but gets to kick some as well. 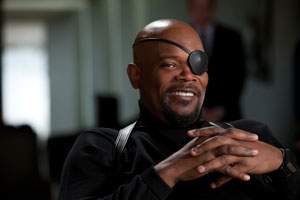 Now the negatives: Sorry, Can't find any. If I was feeling all jaded and cynical, which I have been accused of on occasions, I'm sure I could find faults, and the argument that it's not better than the first just doesn't stand up.

It's as good as the first one, different, but equally as good, and with the bar set so high I'm not complaining. It's got the humour of the first one, a stack of spectacular action and playboy lifestyle fantasy, and lots of geeky references for the fan boys to spot, including a fantastic one with Captain America's shield.

If I have one complaint, I sat through all the credits for the cut scene at the end and it wasn't on the print they showed to the press, but I have been assured that there is one involving the Mexican desert. 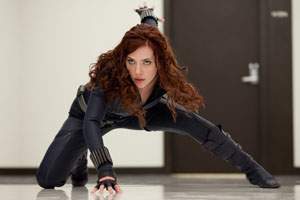 Just go and see IRON MAN 2. It's massive, popcorn entertainment that doesn't really need any critical analysis. It's a comic book movie FFS, and a damn good one, and not Bergman or Kurosawa.

IRON MAN 2 is out everywhere now in glorious 2D.