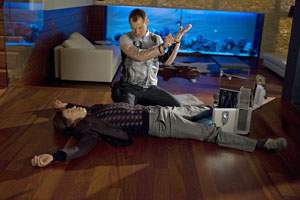 Based on the novel The Repossession Mambo by Eric Garcia, who also co-wrote the screenplay, it has nothing to do with Alex Cox's 1984 cult classic, REPO MAN. In this film of a dystopian future, which looks like a slightly glossier version of Ridley Scott's BLADE RUNNER, Remy (Jude Law) and Jake (Forest Whitaker) are repo men for The Union, a powerful corporation that sells artificial organs to the needy and vulnerable.

Although the organs come with a high price tag, it is high-interest loans that make The Union their money, like buying an extended warranty from an electrical store. However, if the recipient of the new organ can't keep up the payments they get a visit from the repo men.

Having the bailiffs come into your house and take your TV away is mildly inconvenient and a little embarrassing; having the repo men come into your house, shoot you with a tazer then remove the organ in question while you lie on the floor unconscious doesn't leave you with much negotiating power. 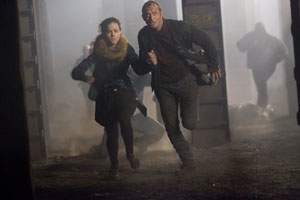 Remy enjoys his unorthodox job, and the rough and tumble with his long time friend Jake, however Remy's wife (Clarice Van Houten) would rather see him in a safer sales job, something Remy is clearly not cut out for, so he takes one final job.

Predictably, like many of the situations in the film, something goes wrong and Remy ends up in a coma needing a new heart, which his boss (Liev Schreiber) convinces him to take. Unfortunately, Remy has a change of heart with his change of heart and losing is killer instinct means losing his income and his ability to pay, so ends up being hunted down by, you guessed it, his best friend. 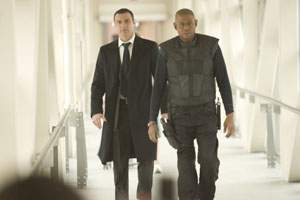 The film is clearly trying to be topical in a sci-fi setting, addressing corporate greed and inhumanity and the massive foreclosure situation in the US, not to mention the downside of private healthcare, but it is not nearly as smart as it thinks it is or wants to be.

The plot points are all predictable and signposted, and the characters clichéd, although the ending does have a twist that you probably won't see coming, but it does feel like it was added as a "let's put in a twist at the end, it worked for Shyamalan".

Overall, if you like blokey, dystopian action movies then this will entertain, even if it doesn't stimulate intellectual debate afterwards.