Oftentimes artists really aren't the best people to ask to describe their work. Either they're too close to what they've made, or they just lack the wider critical awareness to put their work into some kind of context. 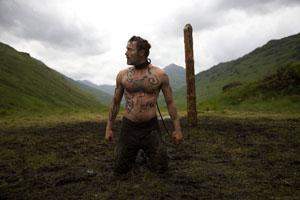 Nicolas Winding Refn describes his new film, Valhalla Rising, as a science fiction movie about people travelling from one place to another through time and space, but he's wrong. Because what he's actually made, is an existential viking movie. One that draws on tales of lone Ronin, Knights Errant, and the films of Kenneth Anger (- the movie itself takes its title from Anger's 1964 film Scorpio Rising).

In the film we focus on the enigmatic and mute One-Eye (Mads Mikkelsen), a fierce and dangerous fighter held captive by a Norse clan in the 1100s. One-Eye is forced to fight all challengers in the name of gambling by the local chieftains, but, as the film progresses, we follow his travels and encounters with other people and dangers. He's joined on this journey by a boy, one who starts off as his keeper, but who eventually comes to speak for the silent loner. 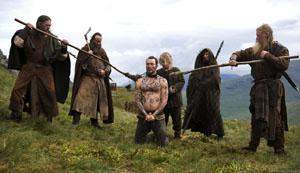 So to the bad bits then. As with all existential, minimalist films, Valhalla Rising is incredibly ponderous and pretentious, isn't really about very much, takes a long time to get anywhere, eventually does get there, almost ends, then, finally, ends. The cinematography is adequate, but never truly able to rise above the look of a classy handheld trek to the highlands, and the acting is moderate to poor, at best. (- Which raises an interesting thought: would the movie have been more appealing and exotic if it was made in a foreign language and subtitled? - a discussion for another time I think!).

But, all that being said, there is still something about the film that doesn't make it a completely worthless watch. Winding Refn obviously has much talent as a director (his previous films have included Fear X, Pusher and Bronson), and, always just when the film seems to be drifting, he manages to wake it up with a sharp image or a shockingly violent act.

It's not enough to move the movie out of the file marked 'Druggy Midnight Movies That Don't Work Well In The Cold Light Of Day', but, in the end, it does give it an atmosphere that's hard to shake, long after the final chapter has ended.