I don’t care who you are – if you grew up in the 1980s and don’t feel some special attraction to horror film hunks like Pinhead and Fred Krueger then you are probably a little dead inside. These characters, or rather, the men who portrayed them, brought such an impressive and creepy appeal to the roles they played it is hard not to love them a little.

I know as well as anyone that audiences are kinda depressed that there is still a lack of original content being created in Hollywood post-writer’s strike, but I don’t care. I want all my favourite things from the 80s to be rereleased or remade – A NIGHTMARE ON ELM STREET included.

I am basically the product of some quite bad parenting. The first horror film I remember was when I was 6 years old – it featured an alligator flushed down the Chicago sewers and stopped me going to the toilet alone for about 2 weeks (I was an awkward child). Not long after that I was deemed old enough for Wes Craven’s A NIGHTMARE ON ELM STREET (goodbye ability to fall asleep alone) and ever since then Krueger has been one of my favourite baddies. 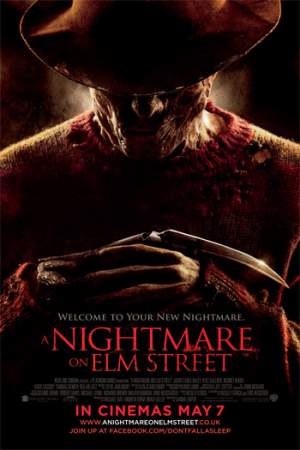 At first I was reluctant to watch Samuel Bayer’s remake which was released in cinemas last week, but then I started wondering what they would do to update it. Like so many remakes, the production team always want to explain more of the back-story and add depth to the characters, and this film is no exception. Though to tell you the truth knowing more about Freddy means liking him a lot less and I really want to love-hate him rather than hate-hate him. Unfortunately, this film just makes me hate-hate him, which means that the one-liners that Robert Englund is so well know for in the original films are less funny and more forgettable when delivered by the new guy, and the cult appeal of the evil murderer is somewhat lost in translation.

Samuel Bayer’s A NIGHTMARE ON ELM STREET (2010) is set in a small US town in Ohio and opens in a late night diner with a clearly very tired teenager, Dean Russell (played by TWILIGHT’s Kellan Lutz), trying desperately to stay awake. Unfortunately for him he falls asleep and in true NIGHTMARE tradition is killed in his dream by a man covered in burn scars wearing a red and green sweater with a clawed glove on his hand. While in the dream it is the burned man cutting Dean's throat, in reality he is doing it to himself in front of a diner full of onlookers.

Following his death, his group of friends discovers that they are all experiencing nightmares about the same man – Freddy (played by Jackie Earle Haley who played Rorschach in last year's WATCHMEN). Knowing that when they are murdered in their dreams they also die in real life they attempt to stay awake in order to save themselves.

The film has had mixed reviews and I suspect some of the criticism is because there was no scene where Freddy eats a pizza with a topping of screaming human faces.

However, for those of you who are little like me and wondering “should I go see it” the answer is “of course you should”. For one thing, the NIGHTMARE franchise is based on such a great horror idea that using it as a basis for telling any story means that the result will be watchable. Secondly, the fact that the film is full of jump-scares rather than the masochistic torture-porn that modern horror is full of is a nice return to just being frightened for being frightened’s sake. And thirdly, what else are you going to do this evening – go to bed early? If so, good luck…