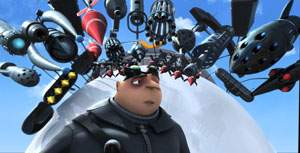 It is pretty safe to say that 3D works best with CG animation. There are a lot of reasons for this, the most obvious of which is the dreadful post-production conversions that have tried to cash in on the success of AVATAR (which is essentially a CG animation), not to mention the elevated ticket price. Even Warners have seen sense and abandoned the 3D conversion of the first part of the final instalment of HARRY POTTER, although they are promising/threatening it for the second part. Another reason is to do with the technical aspect of the stereo conversion, which gives a better result when rendered from 3D CG data than working from 2D films. Of course, films shot with proper stereo camera rigs are a different matter, but these seem to be mostly horror genre movies. The other reason for 3D animation being so successful is the audience. Anyone with small children will be able to tell you about their ability to watch the same film over and over again. Basically they are easy to please. Knowing this, animation creators have got smart by adding adult-friendly content to their films, and Pixar are the masters at this, however, Universal have done a comparable job with DESPICABLE ME. 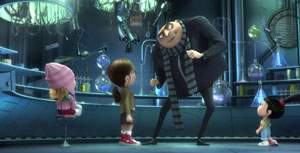 Gru (voiced by Steve Carell) is the most evil man in the world. Despicable doesn't even come close to describing some of his daily misdemeanours. This misanthrope lives in a black house with a dead lawn amongst the white picket fence of suburbia. Beneath this house is a giant underground lair that outdoes Batman's, except its main purpose is to carry out the greatest crimes of history, and he has biggest caper all set to go, but he needs to get a loan from the Bank of Evil (formerly known as Lehman Brothers) to complete it. However, he has a new, younger, evil competitor. To overcome his new nemesis he enlists the help of three feisty young orphan girls - by adopting them. These adorable, cute tearaways turn his world upside down, especially when they discover his secret lair and his yellow minions, who supply the best sight gags of the film. 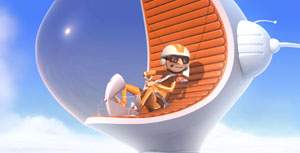 The movie's outcome is pretty predictable but the journey is worth taking. It gets a bit sentimental at times, as with most Hollywood animations, it tends to play with the audience's emotions, but the humour is great, both verbally and visually, and you need to pay attention or you will miss some of the best visual gags that are clearly put there for the adults entertainment. As with TOY STORY 3, the 3D is subtly done and doesn't rely on the "breaking the frame" gimmick, with stuff flying off the screen. When it is used, particularly during a vertigo inducing rollercoaster ride, and during the end credits, it is done very cleverly.

As a grown-up you may not feel comfortable seeing this on your own, but if you have children or young relatives you can borrow it is definitely worth seeing.