Let Me In/Let the Right One In

Without wading into a debate about the relative merits of movie remakes, Hollywood or otherwise, it is only right that this film is viewed without taking into consideration the Swedish original. However, it does beg the question as to why it needed a remake in the first place, except to assume it was made for an American audience that won’t, or can’t, read subtitles.

Even though I think the US remake (from the revived Hammer Studios) deserves to judged on its own merits, in the interest of fair comparison I rewatched LET THE RIGHT ONE IN on DVD, which has been re-released with a new cover to coincide with the theatrical release of Matt (CLOVERFIELD) Reeves' take on the story. 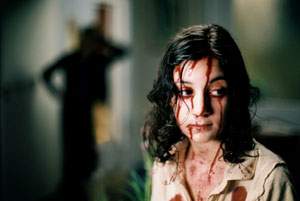 I have to admit, when I first saw the original I wasn't that enamoured with it, possibly because everyone was raving about how great it was. What it had going for it was a new take on the vampire genre that still retained crucial elements of the traditional mythology (must drink human blood, sunlight causes incineration) than the dreadful, but popular, TWILIGHT series. The Scandinavian winter setting certainly adds to the mood, in a 30 DAYS OF NIGHT way, as does the bleakness of the social environment.

Being a European film, its pacing is much slower and there is less dialogue compared to a US movie, which is great when it comes to reading subtitles, unlike the recent Chinese film CONFUCIOUS where it was impossible to read everything before it changed. That film was certainly a case in support of dubbing, but the subbing vs dubbing debate is a long one for another time. 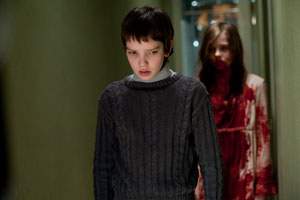 If you saw the Swedish original then there really isn't a lot of need to see this new version because it is a faithful interpretation. On that basis, LET ME IN is still an engrossing film. The two young leads, who essentially carry the picture, give great performances, with Chloe Moretz already proving she has incredible screen presence as Hit Girl in KICK ASS. Kodi Smit-McPhee (THE ROAD) does a victimised geeky naïf very well, and brings to mind Lukas Haas in WITNESS, both in looks and temperament. In fact they are more watchable than their Swedish counterparts.

This could be due in part to the fact that your attention is not being diverted by the subtitles. There are some minor changes to the story, and elevating the importance of the policeman's role works mainly because Elias Koteas is such a great actor. I also thought the choice of New Mexico was a strange one, when Alaska would have been more obvious, but I'm not that versed in US geography and sociology so not really qualified to comment. The only place it is let down is by some very substandard, and unnecessary, CGI in a couple of scenes.

The US version puts a lot more emphasis on the relationships, and has its fair share of (pre)teen high school angst that we are more than familiar with through US TV and movies. On the positive side, its vampire-human relationship is far more touching than anything Buffy, Vampire Diaries, True Blood or TWILIGHT can deliver, maybe because of its innocence.

If you’re a purist (or film snob) then see the original, but this US remake still delivers the story in an impressive way that is easier to watch without dumbing it down.

LET ME IN is in cinemas now from Hammer and Icon.

LET THE RIGHT ONE IN is out on DVD/Blu-ray and available from Play for £4.49 and from all good retailers.