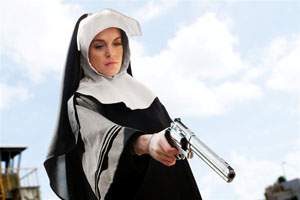 Robert Rodriguez is one of those filmmakers you can't help but admire. He is the epitome of the independent spirit, with his love of genre movies, and his one-man studio in Texas - although he does tend to delegate a lot more these days. His latest film is another homage to grindhouse movies, and the mexploitation films, such as EL MARIACHI, that made his name. Now he has teamed up with many of his regular players (Danny Trejo, Cheech Marin, Michelle Rodriguez) alongside cult stars such as Steven Seagal, Dan Johnson, Jeff Fahey and Tom Savini, and Hollywood A-listers (or ex-A-listers) Robert DeNiro and Lindsay Lohan (who spends her screentime either naked or dressed as a nun with a gun) to bring long-time character Machete to the big screen in his own movie. 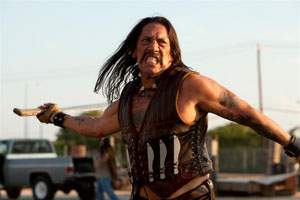 Most people seem to forget that Machete first appeared in the SPY KIDS movies in a somewhat more benign form than he did in the GRINDHOUSE "fake trailer". However, from the outset, this is a far more adult-oriented Machete we are seeing as, from the opening scene, he slashes his way into the drug baron's house with the titular weapon to chivalrously rescue a naked woman, only for her to extract her mobile phone from one the only hiding places left on her body (it must have been on vibrate) to call the boss Torrez (Steven Seagal) and have Machete cut down. Of course, Machete survives, or the movie would have been shorter than the trailer, and turns up on the Tex-Mex border looking for work with the rest of the illegal "wetbacks". While this healthy "black" economy is going about its business, it is being closely monitored by immigration agent Sartana (Jessica Alba). It is also being helped by taco truck cook Luz (Michelle Rodriguez, who, unlike a lot of the production staff, is not related to the director). When dodgy businessman Booth (Jeff Fahey) offers Machete a case full of cash, in one of those offer-you-can't-refuse scenarios, to shoot Right Wing Senator McLaughlin (Robert DeNiro), he finds himself embroiled in a complex conspiracy that brings him face to face with Torrez for the final (over-the-top) showdown.

Aside from the excessive violence and gratuitous nudity, it is a convoluted tale of political corruption, conspiracies, drug-running, revenge and social commentary on US/Mexican migration policies, but because the violence (escaping on an intestinal chord) and everything else (street rods bouncing down the road) is so over the top, the deeper issues are not really at the forefront, although they are still serious issues being addressed. The trouble is, it is hard to take them seriously when you are laughing out loud at the extremity of the implausible on-screen action.

This is supposed to be another homage to 70s grindhouse/Mexploitation films, in the same vein as his project with Tarantino, however Rodriguez eschews the filmic effects that were added to the previous co-production (except in the title sequence). This decision makes sense as it is clearly a contemporary film, and not set in the 70s - a mobile phone secreted in a body cavity is a give away for a start. What it does retain is the sensibility of the genre but updated into a modern setting. This is very much a blokes' film and the misogyny, objectification of women and graphic violence may upset the fairer sex, however there is no shortage of strong female characters who help save the day, to offer some balance. It's just a pity that it has to be released in the cold damp winter because a drive-in would be the ideal place to see it (if they still exist anywhere in the world).

MACHETE is on general release from Sony Pictures on November 26