Way back in March of this year I was lucky enough to attend the first ever screening MONSTERS at London's Hospital Club. It was a production crew screening and I was invited along because SCI-FI-LONDON was, in part, responsible for its existence. If you are a regular visitor to SCI-FI-LONDON (the festival or the site) you will be aware of the story of how MONSTERS' director won the first 48 Hour Film Challenge with a stunning cinematic short called FACTORY FARMED, that was conceived and produced in a weekend. To cut the story short, Gareth got the final green light to make MONSTERS on the strength of that short. Gareth was clearly already a very talented filmmaker and had already won a Bafta for special effects on a BBC show, but SFL presented him the opportunity to create something original of his own, and with Monsters he has certainly done that. In fact, the film has been nominated for six British Independent Film Awards (BIFA). 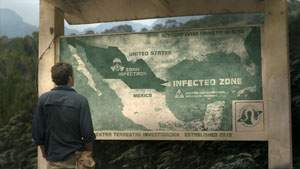 That first time I saw MONSTERS I knew it was going to become a hit, or at the very least a cult classic. This was a different approach to sci-fi and one that the title belies. There are monsters/aliens in the movie but it is not your typical creature feature by any stretch of the imagination, on the contrary it actually stretches your imagination by the non-appearance of monsters. Having repeatedly seen the enigmatic FACTORY FARMED short it came as no big surprise to me, although it has caught some people off guard as they were expecting something akin to CLOVERFIELD or DISTRICT 9, and it is easy (or lazy) to make those comparisons, but this is a British sci-fi movie even though it has American leads and a Mexican setting, and as such it is both gentler and more intelligent and, against common perceptions of British, emotionally intelligent.

Basically, the film is a near future, romantic road movie. When NASA discover the possibility of life on Jupiter's moon Europa, they send a probe to collect samples but it crashes on re-entry into the Earth's atmosphere, depositing the samples into the Mexican jungle. Shortly after, strange creatures begin to appear and the area is quarantined and declared an Infected Zone. A US photographer (Scoot McNairy) is sent on assignment to cover the damage caused by the creatures, but when the annual quarantine period is about to start he is coerced into accompanying his boss's daughter Sam (Whitney Able) back to the US. However, when they miss the last ferry, they are forced to travel overland through the Infected Zone to the safety of the US border, where a massive wall has been built to keep the aliens out.

What makes this film work is the chemistry between the two leads, who were already a couple before the shoot. Because most of the film was improvised, this familiarity made their interaction all the more believable. The other factor that adds to the film's believability is the guerrilla style in which it was shot, recruiting local people to play incidental roles, and not "dressing" any of the sets, with Gareth adding everything, including posters, in post-production, which he did with off-the-shelf software such as Photoshop and AfterEffects. The credibility of these effects make the film all the more amazing when you know how they were done, and the whole movie was done for about the same cost as a single effects shot in a studio blockbuster, and it has more heart than most sci-fi movies and a lot of so-called romantic movies too. In fact this is the ideal movie to take a non-sci-fi-geek girl on a date to.

Whether or not you caught it at Oktoberfest, go and see MONSTERS this weekend (with or without a date) and show support for a great British indie sci-fi movie so it has a great opening weekend that will hopefully conclude with at least one BIFA (the competition is tough). If you have seen it at any of the various festival screenings, go see it again because it is actually better on a second viewing.

MONSTERS is on general release from December 3.

Listen to the Podcast where Gareth talks about making the movie, recorded prior to the world premiere at SXSW in March.