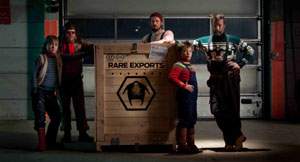 With the UK at a standstill under a blanket of snow, and shops blasting out low-budget Christmas carols, there is definitely a feeling of the Christian-hijacked pagan winter solstice festival of consumer excess in the air. While people enjoy the schmaltzy Jimmy Stewart, Bing Crosby or Will Ferrell version of Christmas, something darker is really more befitting its earthy roots. Anyone who remembers the short COMING TO TOWN that showed at the festival a couple of years back will know what I’m talking about. However, it takes the Finns, who can truly lay claim to Santa Claus, to come up with as dark and subversive as RARE EXPORTS. It must be something to do with all those months without sunlight.

This feature, from music video director Jalmari Helander, is the prequel to his two short films RARE EXPORTS INC. and RARE EXPORTS INC. - SAFETY INSTRUCTIONS, which were massive hits on YouTube. It’s the week before Christmas and young Pietari is concerned about the imminent arrival of Santa Claus because he has discovered an ancient truth about the jolly old gift giver that doesn’t match up with popular view. Some American scientists have also discovered the same information and are busily excavating to uncover the real truth. When Pietari finds out what they are up too, and children start disappearing he enlists the help of his father and his reindeer herding friends to bring a stop to what could be the bleakest Christmas ever.

This is being describe as a family movie, but it is definitely not one for the kids, at least not if you want them to sleep on Christmas Eve. Not only is it scary, it contains a fair share of blood and gore and lots of naked old men running around in the snow, not to mention a liberal about “very strong language” (if you speak Finnish, although it has been sanitised for the subtitles. For older people it will serve as a darkly comic antidote to the sickly sweet Coke version of Santa.

RARE EXPORTS has come to town and is showing in cinemas now.