The Hobbit: An Unexpected Journey

Peter Jackson's been back in Middle Earth again hanging with the orcs, dwarves and hobbitses. Is his now Gollumesque weight reduction somehow related to his obsession with Tolkien's stories, because there does appear to be an obsession there? Turning a less-than 300-page children's story into close to a nine-hour cinema event spread over three movies does seem a tad excessive (the unabridged audiobook runs to 11 hours). Jackson has added lots of back story gathered from The Silmarillion, while beautifully shot, is not essential for the advancement or understanding of the story. It seems to be suffering from what I call the Rowling syndrome, where there is more back story and exposition given than is needed because the creator wants to include but the publisher/studio doesn't want to interfere for fear of upsetting their creative cash cow.

This does sound like I am down on the movie (rather than down with it - as the young folk say), but it is worse than that, I'm indifferent. As a youth I enjoyed reading the stories of Middle Earth, but there was organic weed, mushrooms and prog rock back then, which made it seem all the more real. We didn't need "visionary directors" as we were having plenty visions of our own. To be fair, Jackson did an amazing job of bringing Lord of the Rings to life, whilst singlehandedly revitalising the New Zealand economy and making fantasy creatures more famous than the kiwis and sheep the country was known for. However, my views of the trilogy were slightly undermined by the brilliant scene in Kevin Smith's Clerks 2, where they described Lord of the Rings as no more than movies about walking, and that prejudice has stuck with this one, and there is plenty of walking through New Zealand vistas in this new trilogy, interspersed with moments of running (like an episode of Doctor Who). While The Hobbit does seem like more of the same, the advancements in filmmaking technology since LOTR does mean that Jackson had more, and better, toys/tools to play/work with, including 3D. 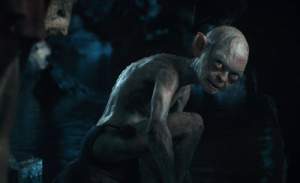 I'm not a fan of 3D, and the raft of bad conversions has done little to convert me, but with opening shots of The Shire and the inside of Bilbo's house are quite spectacular, especially in the much vaunted 48fps format, but the initial impact soon wears off and the 3D effect almost disappears as the brain adjusts to it. The problem with the 48fps digital look is, it is too clean. It may be fine within the OCD environment of Bilbo's home, but once the party are on the road and mixing with trolls and orcs, you (well, I) want an image that is a bit more grimy and rough around the edges. Where the advances in CG really shine through is when we encounter Gollum for the first time. He looks much more real, which allows his humanity, and psychosis, to come to life, of course Andy Serkis's performance is a huge contributing factor to that.

Also Martin Freeman does a superb job of bringing the young Bilbo to life, which more than makes up for his less-than-favourable Arthur Dent. He perfectly captures the lead hobbit's naive vulnerability and surprise heroism, and the scenes with Gollum and Bilbo are probably the most fun, and emotional, in the film.

The rest of the cast fulfil their roles, with most of them almost unrecognisable under the prosthetics and digital enhancements, especially Barry Humphries (Edna Everage) as the Great Goblin, who looks like the bastard offspring of Jabba the Hutt and Boss Nass. The other standout is Sylvester McCoy as Radagast, a wizard more off kilter than Catweazle.

This is probably most suited to the legions of LOTR and Middle Earth fans, who will have no doubt have queued up to see it on its opening day, revelling in the extended HD 3D stay in their favourite fantasy world (personally, I prefer that of Game of Thrones, which easily matches Tolkien in terms of mythological scope, and is more down and dirty in its production). While that stay is never boring, I'm sure the whole story condensed into one three-hour film would have been just as satisfying.

The Hobbit: An Unexpected Journey is in cinemas now.