Faust, Caprica, Iron Man, Indiana Jones, Prometheus, Journey to the Centre of the Earth, Seaquest, Twenty Thousand Leagues Under the Sea and more. Who'd have believed it was possible to compress all those tropes into nine minutes of IMAX 3D footage and for it to still feel fresh, original and exciting? That's what we got from the first reveal of Star Trek: Into Darkness, and that was just the opening sequences of what must be one of the most hotly anticipated films of 2013, Iron Man 3 and Pacific Rim notwithstanding. It also left a lot of unanswered questions.

After the screening, which was introduced by amusing clips from JJ Abrams and Simon Pegg, there was a short Q&A with producer Alex Kurtzman, and actors Alice Eve, who revealed she is playing Dr. Carol Marcus, and Benedict Cumberbatch, who was on fine form for such an early hour in the morning, who announced that he is not playing the much-rumoured Khan, but a terrorist call John Harrison "who does despicable things for a noble cause", which is surely the modus operandi of all terrorists/freedom fighters. (I'm assuming that there must have been a meeting at some point where they decided that having a terrorist called Khan was probably not a good idea in the current climate of US Islamophobia). 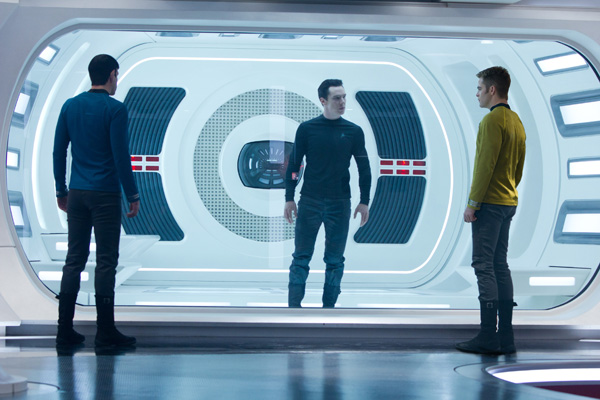 With secrecy, discretion and deflection at levels Steve Jobs would have been proud of, very little else was revealed about the film, apart from some technical aspects of the shoot on IMAX, and the producer's disdain for the cameras but the love of its look, and the usually actory accolades for fellow cast and crew.

I've never been a Star Trek fan, which may be considered worse than heresy by some, but I am intrigued and even excited to see this when it is finished, based on what was revealed this morning.

The footage is being shown before selected IMAX screenings of The Hobbit, which may be the best incentive to go and see it.

Star Trek Into Darkness is scheduled for UK release in May 2013.