We're the first to admit that some (ok most) of the films we show at the festival tend towards the weird, but in a wonderfully original and independent way. It's the whole point of the festival, to show films that you probably wouldn't see anywhere else. Thankfully, some do break out of the festival circuit and into shops or online, so if you missed them, or enjoyed them, there is a another chance to see them. 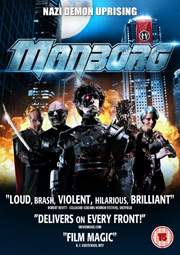 One of the stranger films we showed was Manborg, a delicious pastiche of genre movies from the 70s and 80s. Everybody that sees it enjoys it, and it has cult film written all over it. If you are going to Sci-fi Weekender in March, we are showing it as part of our film programme in the Screening Room. However, if North Wales in winter doesn't appeal (it's not that much different to summer) then Manborg is out on DVD and available to order from Amazon.

Another hit feature film from the festival, Ghosts with Shit Jobs, will also be showing alongside some genre classics.

As you know, we love shorts (films, not trousers) and there will be a session at the Screening Room dedicated to shorts, including a selection from past festivals as well as our 48 Hour Film Challenge (some of which can be seen at The Multiverseon YouTube. Speaking of which, the winning short from SFL11, BELIEVEtheDANCE, is available from the streaming service and you can watch it here.