Oscar Diggs (James Franco), a small-time circus magician with dubious ethics, is hurled away from dusty Kansas to the vibrant Land of Oz. At first he thinks he's hit the jackpot-fame and fortune are his for the taking. That all changes, however, when he meets three witches, Theodora (Mila Kunis), Evanora (Rachel Weisz), and Glinda (Michelle Williams), who are not convinced he is the great wizard everyone's been expecting. Reluctantly drawn into the epic problems facing the Land of Oz and its inhabitants, Oscar must find out who is good and who is evil before it is too late. Putting his magical arts to use through illusion, ingenuity-and even a bit of wizardry-Oscar transforms himself not only into the great and powerful Wizard of Oz but into a better man as well. 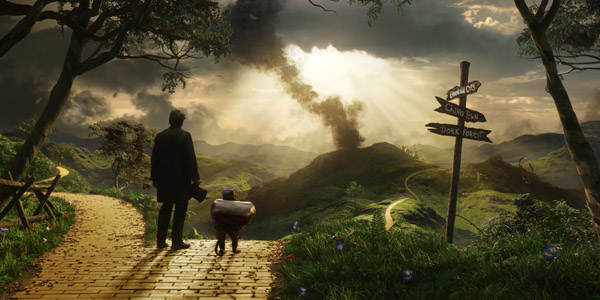 To mark the upcoming 3D release of OZ THE GREAT AND POWERFUL on 8th March, RealD, the world's most widely used 3D cinema technology, Vue Cinemas and Walt Disney Pictures have partnered to create a one-off, interactive experience that will celebrate the magic of the film in 3D.

Tim Richards, CEO of Vue Cinemas, said: “This half-term, we want our audience’s trip to the cinema to be the ultimate viewing experience so, from 15th February – 4th March, we will be offering cinemagoers the chance to walk down the yellow brick road, exclusively at Vue Westfield London, and experience the sights and sounds of the Land of Oz. Cinemagoers can truly immerse themselves in the magic of the film on 16th February and 9th March when an amazing magician will be at the cinema performing for Vue customers."

Visitors to the experience can use the interactive touchscreen to get an exclusive preview of how the Land of Oz looks and find out how to win an out-of-this-world holiday to Sydney, Australia by booking tickets online. They will also be able to pick up their own pair of limited edition, specially designed OZ THE GREAT AND POWERFUL themed RealD 3D glasses ahead of the film’s release.

Bob Mayson, Managing Director, RealD Europe says: “RealD 3D draws moviegoers further into the fantasy of a movie, but we wanted to go the extra mile for this fantastical film and bring the vibrant Land of Oz literally to life with this interactive experience.”

Lee Jury, VP of Walt Disney Studios UK & EMEA said: “Disney’s OZ THE GREAT AND POWERFUL is set to be another classic addition to Disney’s catalogue of family entertainment. By bringing this world to the cinema foyer, cinemagoers can immerse themselves in the film before experiencing this magical world of 3D on the big screen.”

Walt Disney Picture’s OZ THE GREAT AND POWERFUL will be screened at Vue Cinemas from March 8th on RealD’s industry-leading, brightest 3D screens.