Ashens and the Quest for the GameChild

The premier of Stuart Ashen’s YouTube feature film project was entirely descriptive of its creator’s dream. From Red Dwarf star Robert Llewellyn pottering about to a starstruck-looking man in an Umbro anorak clutching an Iceland carrier bag, the doors of this small Soho cinema were opened to anyone who’d contributed.

The guy with the Iceland bag was probably one of thousands who’d paid into the $74,000 project on Indiegogo, while Llewellyn was one of several celebrity cameos in the movie, but it was testament to the personal creed of Ashen – arguably one of the first major British YouTubers of prominence –that this cross-section of supporters would only be allowed to watch the film at precisely the same second the rest of the world got it through the free, online streaming medium that built him his growing cult following. 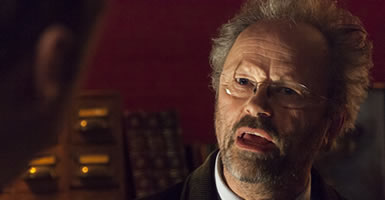 But it doesn’t matter whether it’s viewed on the big or not-so-big screen, Ashens and the Quest for the Gamechild is an unparalleled success no matter how it’s digested. From the first bars of the Bond-parodying, CGI-fuelled title sequence, production values feel truly enormous. Before the screening, both Ashen and director Riyad Barmania talked at length about their passion to bring a feature to YouTube without compromising quality, and it feels like a race they've simply walked without breaking a sweat. Every penny of the $74,000 investment appears on screen.

Quite apart from all that, and more crucially, the film is also funny as hell. For a man who has made his name reviewing pound shop tat on a brown sofa, Ashen trades deftly on both his reputation as a collector of 'useless items' and on a wider heritage of geek fiction. Indiana Jones, Star Wars, Lord of the Rings and more are referenced, but absolutely never relied on, to build an ironically boiler plate, but highly pedestrian, 'quest' narrative that manages to stay quick- witted and lightly sardonic without ever demonstrating the desperate reliance on its classic inspirations that make the Scary Movies of this world so utterly dire.

It's an adventure movie that's confident and comfortable to stay in Norwich, preferring to volte face at the first risk of anything truly epic by playing everything for laughs instead. There's no battle with alien robots at the end of this tat crawl, and it's all the better for it.

With dozens of guest appearances from Ashen's YouTube friends (including a hilarious appearance from Gamechild channel host “The Multiverse” owner Warwick Davis), enough in-references to his own crazy body of work, and more than enough giggles for anyone who ever played Space Attack or collected rip-off Game and Watches as a kid, Ashens and co. have truly nailed this. If this is what YouTube talent and the cash of loyal Indiegogoers can produce in a year, the future looks exceptionally bright for the crowdfunded movie scene.

Ashens and the Quest for the Gamechild is completely FREE and available NOW from The Multiverse YouTube Channel. It's 88 minutes of time absolutely well spent. Go watch!