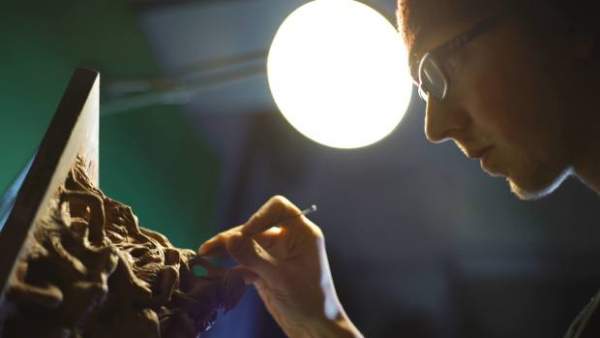 Frankly we can't wait for this to be finished.    A couple of years ago we screened MANBORG at the festival and also at the SCIFIWEEKENDER.

We know that we changed the life of a few people who saw this film and can understand why... it is an epic in a green-screened, puppeted, cliched masterpiece that appeals to anyone who loved those 1980s straight-to-video.    So, just as we thought it couldn't get any better...  they are making a new film called THE VOID.

THE VOID is new film from writer/director team Steven Kostanski and Jeremy Gillespie. Best known for their work as part of the Astron-6 collective (MANBORG, FATHER'S DAY), they are also design and FX veterans of major Hollywood productions (PACIFIC RIM, ROBOCOP, NBC's HANNIBAL).

"With this project we are pooling over ten years of experience to conjure up a terrifying film that will combine the aesthetic attitude of modern horror cinema as it emerged in the 1970s with the splatter and sophisticated practical special effects that ruled the creature features of the 1980s and early 90s. But make no mistake, unlike MANBORG and FATHER'S DAY, this time we aren't joking around. We are committed to introducing audiences to a unique horror-mythology." - Steven Kostanski & Jeremy Gillespie

So, you can help be part of this by supporting their crowd-funding -

Go to http://igg.me/at/thevoid for full details and check out the videos below!

and check out the teaser here:

The Void - Campaign Video from Cave Painting Pictures on Vimeo.